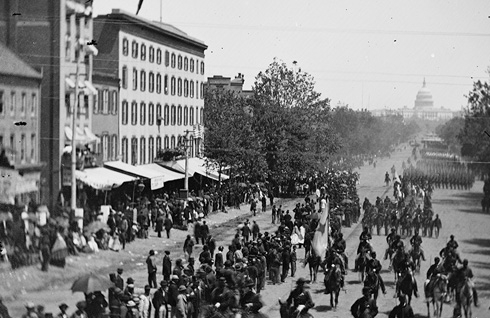 Grand Review of the Armies (Library of Congress)

Today in the nation’s capital of Washington, D.C. the Grand Review of the Armies takes place.

Beginning at 9:00 a.m. sharp on a bright and sunny day, some 80,000 soldiers from the Union Army of the Potomac parade through the streets to the cheers of politicians, officials and citizens, including president Andrew Johnson, standing alongside general-in-chief Ulysses S. Grant.

Major General George Meade, victor at Gettysburg, leads the procession through the streets of the city from Capitol Hill and down Pennsylvania Avenue. Soldiers and spectators alike often erupt into patriotic songs.

The parade continues on the morrow when Union General William T. Sherman and some 65,000 of his soldiers parade through the streets of Washington to the cheers of onlookers. Trailing Sherman’s army are many freedmen who had attached themselves to the army as it marched through Georgia and the Carolinas months earlier.

Within a week following the two-day celebration, the armies of the United States are disbanded, with many volunteers on their way home, some for the first time in several years.

As Washington celebrates, the American Baptist Missionary Union is meeting in St. Louis, Missouri. There is much joy, too, among American (Northern) Baptists.

Today’s featured conference sermon, preached by Henry C. Fish, is about the advancing of Christ’s Kingdom on earth. Fish talks of how God has used wars of the past to advance his kingdom. He also talks of the just-concluded war and rejoices that God’s freedom has won.

…. The greatest war of the world is the slave-holders’ rebellion, just now terminated. Chiefly from the violation of two of God’s chiefest ordinances,–the sacredness of government and the brotherhood of man, it came upon us. The political heresy of “ State Sovereignty” put at defiance government, and if uncured must have eventually been our ruin, as it had been, two thousand years ago of the loveliest form of civilization known to antiquity, that of Hellas, (Greece) which the splendid conception of Pericles would have formed into one grand confederation, like our Union, but which was torn into bleeding fragments by civil wars and wars of intervention, from the notion of autonomy,—self-independence—possessed even to madness. It were itself a suflficient recompense for the sore evils we have endured, that this heresy is thoroughly burned out, and the several parts of the Union are being finally and forever unified in territory, feeling, aim.

And surely not a less happy result, is the sudden and already well nigh universal disappearance of the disturbing element, slavery. It is just 77 years to a day since South Carolina came under the Federal compact, by ratifying the constitution of the United States. One half of that time had not elapsed, before a senator of hers uttered these words in a speech in the Senate Chamber: “Let an abolitionist come within the borders of South Carolina, if we can catch him. we will try him, and notwithstanding all the interference of all the governments on earth, including the Federal Government, we will hang him.” (Mr. Preston, 1838.)

Four years ago and more, an ACT was passed, with grave formality, of which this is an exact copy :

“We, the people of the State of South Carolina, in convention assembled, do declare and ordain, and it is hereby declared and ordained, that the ordinance adopted by us in convention on the 23d day of May, in the year one thousand seven hundred and eighty-eight, whereby the Constitution of the U. S. of America was ratified, and also all the acts and parts of acts of the General Assembly of this State, ratifying amendments of the said constitution, are hereby repealed : and that the union now subsisting between South Carolina and other States, under the name of the United States of America, is hereby dissolved. Done at Charleston this 20th day of December, in the year of our Lord 1860.

What a history do these three dates represent! The compact, the threat, the sword! The abolitionist did go into South Carolina, and was going everywhere; and to stop him slavery drew the sword, and perished by the sword. Now the abolitionists, instead of being hung, do the hanging. And our broad acres are all dedicated to FREEDOM. Had God but told us that our babes should see this, we had gladly died without the sight. And yet our eyes behold it.

Four years of WAR have brought this to pass :—terrible years, it is true, but of what progress, when it is settled for all generations to come, that government has a right to live, and that man has a right to be free! Praised be God, that we were enabled to suffer and to endure till the work was done ….