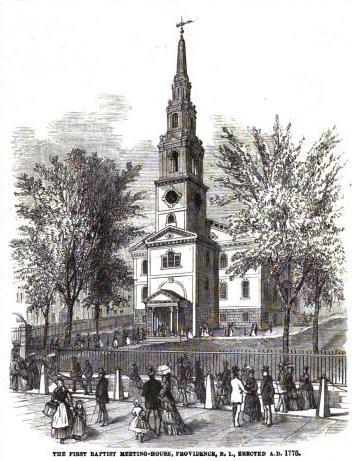 Founded in 1638 under the leading of Roger Williams, the First Baptist Church of Providence, Rhode Island was the first Baptist congregation in the New World. In both religious and civic life, the early Baptists of Rhode Island, despite intense opposition from nearby colonial theocracies, chartered a course of freedom of conscience, religious liberty for all and church state separation that in time shaped America and the world.

In 1775 during the American Revolution, the congregation constructed their third meeting house, the first Baptist church in America to feature a steeple and bell. These features soon became characteristic of Baptist meeting houses in late 18th and early 19th century America, evidencing the growing respectability of Baptists in a nation of freedom of conscience, religious liberty for all and church state separation, of which Baptists led the way in securing in the First Amendment to the U.S. Constitution.

Today the current members of the First Baptist Church of Providence gather to celebrate the 90th anniversary of the dedication of their meeting house. Pastor Samuel L. Caldwell delivers a discourse, reminiscing about how God has used the building.

“A meeting house comes to have a life, a biography, of its own,” he notes. The sanctuary has stood throughout “changes which has passed through all around.” Learned ministers spoke from the pulpit over the decades, many having since passed away. Within the building in the years since its completion were added a stove, an organ, new pews, a baptistry, new paint, carpet, and various other changes via remodeling. Sunday School was introduced in the late 1850s.

Many notable events in American life had been commemorated within the walls of the meeting house, including “the treaty of peace in 1783, the adoption of the constitution in 1789, the death of Washington in 1800.” In addition, the meeting house, far from the battlefields of the Civil War, weathered the great conflict untouched.

“The influence which this house has had on the spiritual life and history of men here, through all these years, who can read or measure?” Caldwell ponders near the end of his sermon this day.

Far to the South, another Baptist congregation faces new realities brought about by the recent extension of freedom to black members, freedom secured by the United States victory over the slaveholding states of the South. The racial dynamics of a new day in the South, however, have yet to sort themselves out as evidenced by what happens this day in a meeting of the Smyrna Primitive Baptist Church in Monroe County, Georgia.

“Benny, Whitman and Robert,” three former slaves charged with “leaving their master and going to the Yankees,” have returned (whether voluntarily or by force is not disclosed) and have asked their (biracial) congregation to forgive them. Today the Smyrna congregation accepts the contrition of Benny, Whitman and Robert and forgives the three black men who are now freemen.

In hundreds, perhaps thousands, of Baptist congregations throughout the South, free blacks have not yet fully exercised their autonomy in leaving the white-led congregations which they (as were their ancestors) were often forced to attend, as commanded by their owners. For now, these black and white Baptists yet gather together in meeting houses, feeling one another out. But the separations are coming, and soon.