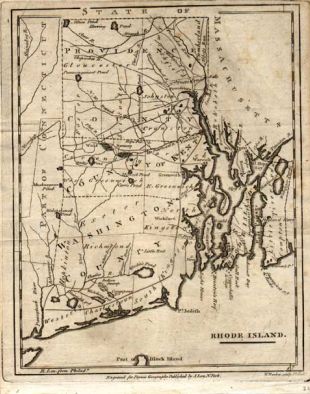 Well aware that continued Union resistance is futile in the battle for Fort Sumter, the fort’s commander, Major Robert Anderson, arranges for a surrender. The formalities of defeat will take place on the morrow, but the Confederate celebration begins today.

Sumter’s legacy will forever be remembered in American history. In 1884, an early historian of the Narragansett Baptist Association of Rhode Island (that state being the original home of Baptists in colonial America), founded less than a year prior to the Civil War, recalled how the organization’s twenty member churches responded to a nation now formally at war over black slavery.

With memories yet vivid from their faith ancestors’ colonial imprisonments, persecutions, and struggles for freedom, Narragansett Baptists went to war against slavery, out of loyalty to a nation devoted to freedom, and from the conviction that God guided the course of the United States’ freedom march:

Before a year had passed, Civil War burst forth in the land as suddenly and as unexpectedly to most as the tornado on a delightsome summer afternoon. The thunders of Sumpter fell upon the ear like that from lightning in a clear sky; its fall was as the descent of an angel from on high calling with clarion tone, to arms! The churches heard the summons; they recognized the mandate of the Supreme, and promptly obeyed. Their younger sons, clad in the full panoply of war, and remembering what Inspiration saith, “the powers that be are ordained of God,” and “therefore he that resisteth the power withstandeth the ordinance of God,” what their fathers had suffered to secure the priceless heritage they enjoyed not only through the turmoils of war, but from imprisonment and bonds and stripes, and what their Master had endured that whosoever believeth may have eternal life, at once entered the held, enthusiastically singing, “As He died to make men holy let us die to make men free,” and from Bull Run to Appomattox, each, according to his several ability, whether clad in a plain blouse or wearing a general’s stars, acquitted themselves like men. Some were permitted to fulfill the complete sacrifice tendered by enlistment, and to pour forth their life’s blood on the triple altar of Liberty, Country, and God. Of such the Wickford Church lost two at Newbern; the First, Newport, Corporal Thomas B. Tanner, at Antietam, when he had gallantly borne the stars and stripes to within twenty feet of the enemy’s lines; and the First, South Kingstown, on the same hotly contested field, its recent Sunday School Superintendent, Brigadier-General Isaac P. Rodman, whose brief, but brilliant record, clearly revealed the possession of military talent of a high order. Most, however, returned. Though a thousand fell at their side, and ten thousand at their right hand, they were granted to behold the reward of the wicked, and having served well their day and generation, to enjoy the peace their valor won under their own vines and by their own firesides. They who remained at home strengthened the arms of their brethren by contributions of money and clothing and delicacies, as well as by words of sympathy and approval and prayer. They saw that the churches should purify themselves at the earliest opportunity of all suspicion of complicity with that evil which had evoked the wrath of the Most High, and exerted their influence in the State to the same great end. As early as 1H42, the Quidnesset Church had declared its belief that it is “wrong to hold any of our fellow beings in slavery, that it is contrary to our religious principles, and also contrary to the precepts of the gospel of Jesus Christ,” and voted that “all persons holding a slave or slaves, and not treating them as subjects of their own family, and also who do not intend to emancipate them at the first proper and suitable opportunity, shall be excluded from the communion and fellowship of this church.” With these sentiments the entire Association was in more or less hearty accord, for when judgment overtook us it was prompt to “acknowledge His right as the God of the nations to punish us for our rebellion against His government, and” to “recognize in the terrible character of the punishment, His utter abhorrence of our great national sin, and His fixed purpose to purge us from it.” It set apart the fourth Sabbath evening of each month as special seasons of prayer for the country, and appointed the third Thursday in October, 1862, as a day for fasting and humiliation. The First Hopkinton Church was not exceptional when it stated that “the gospel we sustain among us proclaims liberty to the captives, the opening of the prison to them that are bound, a complete submission to our Lord Jesus Christ, and no sympathy with rebels or traitors, North or South.”

The language and imagery thus associated with the Narragansett Baptists of Rhode Island – a religious people who worshiped a God of freedom and valued living in a land of freedom – broadly represented the manner in which many white Baptists of the North viewed the Civil War: a struggle to further advance God’s, and the nation’s, principles of freedom.