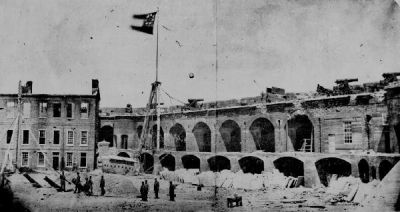 Outnumbered and out-gunned, Fort Sumter’s Union contingent formally surrenders to Confederate forces after 34 hours of bombardment. In surrendering to Confederate General P. G. T. Beauregard, U. S. Maj. Robert Anderson hands over Fort Sumter to the South and is treated well by his southern captors.

There are no casualties from the war’s first battle, and many Union soldiers, including Abner Doubleday, from a prominent Baptist family, will fight another day.

Yet an unanticipated death mars the solemn occasion. As the Union is preparing for a 100 gun salute to the U. S. flag, Private Daniel Hough of New York is killed when a canon he is loading discharges prematurely. Hough’s death is indicative of the dangerous unreliability of weaponry of the era.

The New York Herald today carries news of the surrender:

Fort Sumter has fallen! Major Anderson and his comrades, after a gallant struggle of some forty hours’ duration, in which he sustained a heavy and continuous fire from the batteries of the secessionists, that not only greatly damaged the fort, but also set on fire the wooden structures within it, struck his flag and surrendered to the revolutionists. It is stated positively however that none of the officers of the garrison were wounded; neither were any of the Carolinians killed. Five of the garrison of Fort Sumter were wounded. The fleet off the harbor took no part in the conflict. Major Anderson and his men were conveyed to Morris Island, and subsequently Major Anderson proceeded to Charleston, where he is the guest of General Beauregard.