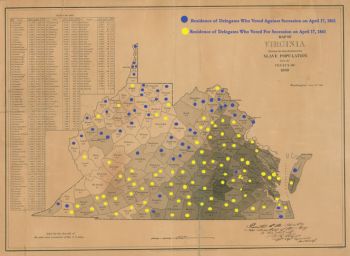 In Virginia, the surrender of Fort Sumter and Lincoln’s call for troops dramatically change the dynamics of a once-divided state. Whereas secessionist advocates the week prior were wringing their hands and puzzling over how to combat predominantly Union sentiment in the state, the momentum is now on the side of secessionists. The debate concerning the wisdom and legalities of seceding is suddenly moot as state delegates begin choosing sides in the heat of the moment.

In the midst of renewed urgency, the Virginia convention today takes another vote on secession. This time it passes, by a vote of 88 to 55. Virginia thus becomes the eighth state to join the Confederacy, subject to a voter referendum in May (which also passes). Secessionist votes are drawn primarily from the eastern lowlands dependent upon slave labor for agricultural production, while unionist votes are clustered in the western highlands where slavery is much less common (see illustration). Soon, as a result, West Virginia will splinter off from Virginia and side with the Union.