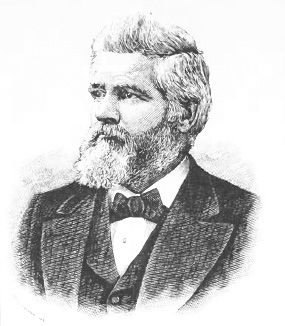 Dr. Galusha Anderson (illustration), a graduate of Rochester Theological Seminary (and the first to have earned a doctorate from Rochester), is the pastor of Second Baptist Church of St. Louis, Missouri. He has been pastor of the congregation for three turbulent years. During this time, two infant sons and his wife died, leaving Anderson with no other family in St. Louis.

In the wake of his losses, Anderson threw himself more and more into abolition activities. Early on during his St. Louis pulpit tenure:

“One of the deacons of my church was a slaveholder. He was a Virginian by birth. His slaves came to him by inheritance. In him, linked with sterling ability were rare modesty and unusual benevolence.  Giving seemed to be a luxury to him. He contributed to every good cause to the extent of his ability and often beyond what could have been reasonably required of him. The suggestion of a smile was always on his lips. It was a part of the man; the outward expression of the sunshine of his soul. And yet this noble, tender-hearted man held his fellow men in bondage.

About  two months after I became his pastor, one evening in response to his cordial invitation, I dined with him. After the cheerful meal was over, he took me aside into a private room and to my astonishment and delight said, ‘If you ever wish to say anything in the pulpit against slavery you need not hesitate on my account; there are two things that I abominate: one is selling liquor and the other is selling niggers.’ Yes, he said, ‘niggers’; they all did. He then told me that he had inherited his slaves and felt under solemn obligation to care for them. He also declared that they were all manumitted, and that their manumission papers were in a certain drawer in a bureau, which he pointed out to me; so if he should die, they would all be free.  But he said, ‘I do not wish them to know this. They are all young and I am trying to train them, so that when they know that they are free and must shift for themselves, they will be able to earn their own living. They are well cared for; for the present I am the nigger of this household.’ And so he was. Marshal Brotherton served everybody, even his own slaves.”

Anderson also chronicled the story of slavery in St. Louis during the Civil War era. As a border state, the issue of slavery was hotly contested in Missouri. In the winter of 1859-1860, the state legislator passed a bill outlawing free blacks, many of whom lived in St. Louis. Although Governor Robert M. Stewart’s personal views were pro-slavery, Anderson observed what happened next:

“… he had been brought up in eastern New York. The doctrine that all men, irrespective of color, have an inalienable right to liberty had been breathed in with the air of his native hills, and had become part and parcel of his life-blood. As he looked at the infamous bill, passed almost unanimously, the teaching received in boyhood asserted itself. It was stronger than his pro-slavery  Bourbonism, stronger than party ties. . .”

Stewart refused to sign the pro-slavery bill, and it never became law in Missouri.

Yet the slave question bedeviled the city of St. Louis, as Anderson observed:

“… pro-slavery sentiment largely prevailed (in St. Louis). Those who cherished it were often intense and bitter, and at that time socially controlled the entire city. But on the other hand the leading businessmen of the city were quietly, conservatively, yet positively opposed to slavery. Many of them had come from New England and the Middle States and believed slavery to be a great moral wrong …

Throughout the Union the political conflict was fierce, but in Missouri, and its great commercial city, St. Louis, it was unusually hot and acrimonious. African slavery was the distracting problem. None attempted to disguise it. Men on every hand spoke plainly and boldly. Most of the people of the slave states, and the citizens of Missouri among the rest, believe with all their hearts that if the Republican party should be successful at the polls, henceforth slavery would probably be excluded from the territories (to the West and north of Missouri) and at no distant day, would become extinct even in the states. . .They regarded (Abraham Lincoln) as the embodiment of all their apprehended woes, and so they poured out on him without stint their bitterest execrations.

To me it has always been a genuine joy that it fell to my lot to cast one of those ballots (for Lincoln). They were ballots of freedom and progress.”

Deacon Brotherton also served as county sheriff for a time, during which he bought George, the colored sextant of Second Baptist Church. George’s master had died and the slave implored Brotherton to purchase him in order to prevent him being sent to the New Orleans slave market. Brotherton, although not needing a servant, purchased George, quietly (without George’s knowledge) credited his work toward his manumission, and trained the servant in the ways of the business world.

In due time, to Dr. Anderson fell the task of telling George, a respected member of the Second Baptist congregation, that he was in reality a free man:

“The next day I met George at the church. It was a great joy to me to tell a man who thought that he was a slave that instead he was a freeman. And my poor pen cannot depict either his happiness or mine, as I told him that simple story of his master’s kindness and benevolence of which he had been the unconscious recipient. He listened at first amazed; then joy beamed from those large tear-filled eyes. He seemed at once to be transformed. In broken utterances he expressed his gratitude to his master and to me. There was no happier soul on earth than he just then. He had come to his duties that day supposing that he was a slave; he did those duties with the new-born sense that he was free. No two states of mind could be in sharper contrast. To him old things in a moment passed away and all things became new.”

When South Carolina seceded from the Union, the future of Missouri was uncertain. The following month, January 1861, a public slave auction was held in St. Louis, but abolitionists conspired to prevent the Africans from being sold, and the event would prove to be the last public slave auction in the city.

According to Anderson, as war clouds had gathered and then the conflict formally burst forth between North and South, the city’s ministers did not speak of the matter from the pulpit, until a Presbyterian minister broke the silence and preached a Secessionist sermon.

Anderson felt compelled to respond from the pulpit of Second Baptist. On this evening, Sunday, April 21, Anderson preaches from Romans 13, speaking of Paul’s admonition to be obedient to government authorities. The congregation grows quiet as they listen to the first Union sermon preached in the city of St. Louis. Afterwards, Anderson leads in the singing of “My Country Tis of Thee,” as Methodists and Unitarians, passersby, join in.

Anderson’s sermon had repercussions. In the following days southern loyalists stormed the church, broke a window, and shot a deacon. Some Second Baptist members left to never return, and one newspaper wrote of the sermon under the headline of, “The Devil Preaches at Sixth and Locust.” Later, Galusha Anderson was “named as one of the five men who kept Missouri in the Union and was one of the ten on the South’s Most Wanted List to be taken captive.”

In the midst of the violence following his sermon, Anderson remarried. His bride stuck by this side, and Second Baptist Church eventually emerged as a stronger congregation, becoming a leading church in the city for many decades following. Anderson in the post war years became a prominent Baptist educator.