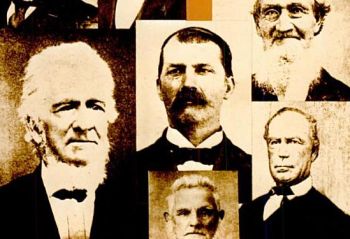 Union sentiment remains high in parts of Tennessee. By the thousands Union sympathizers flee to Kentucky to escape conscription into the Confederate Army, from whence many join the Union army. One such man is Lindsay Cooper, a Baptist who survives the war and becomes a successful preacher, missionary and evangelist in his home state:

Lindsay Cooper was born in Campbell County, Tenn., November 1, 1833. He was a son of John Cooper, who was born, at Ellicott’s Mills, in the state of Maryland, and served in the War of 1812. In May, 1850, young Cooper professed faith in Christ and was baptized into the fellowship of Indian Creek Church, in his native county. December 21, 1856, he was married to Miss Mary Gaylor. To this union were born nine children, seven sons and two daughters. In December of 1860 he moved to Morgan County. At the outbreak of the Civil War he “refugeed” for a time in Kentucky. August 8, 1861, with Capt. Joseph A. Cooper, who afterwards became General Cooper, and three other brothers, he was mustered into the service of the Union army, as a member of “Company A, First Tennessee Infantry,” He served in the war three years and seven months. Returning from the war he changed his church membership from Longfield Church, near Coal Creek, to Liberty Church, in Morgan County. By this church he was “licensed to exercise a public gift,” and in 1866 Pleasant Grove Church “ordained” him to the full work of the ministry. He was pastor of Union, Liberty, Pleasant Grove, Indian Creek, Coal Hill, Pine Orchard, Crab Orchard, Emory, Black Creek, New River, Cooper’s View, Pisgah, Glen Mary, and other churches. He was chiefly instrumental in the constitution of five new churches and in the erection of two new meeting houses. He did a great deal of missionary and evangelistic work, and baptized hundreds of people. His ministry was mostly in Campbell, Scott, Morgan and Roane counties, extending over a period of forty-nine years, and, for the most part, was pioneer work, laying Baptist foundations and fostering weak Baptist interests in a comparatively new and undeveloped country. His mission was to preach the gospel to the poor, to supply “destitute” places with the Word of God. He had good evangelistic gifts and was an uncompromising Baptist ‘, contending always and under all circumstances, conscientiously and earnestly, for the “faith delivered once for all to the saints,” never shunning to “‘declare all the counsel of God.”

From the home of one of his daughters, near Wartburg, Morgan County, February 171, 1916, Elder Cooper departed this life, being in his 83rd year. At the time of his death he was a member of Cooper’s View Church. Funeral services were conducted by Elder John Wilson, who drew lessons for the living from the respective and divinely contrasted character and destiny of the rich man and Lazarus (Luke 16:19-31). The remains of the deceased were the first to be deposited in the new church yard of Coopers Chapel, a meeting house just built and named in honor of the chief builder, Brother Cooper.