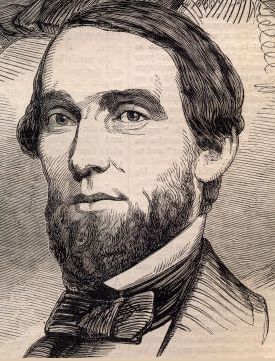 Alabama secedes from the Union, becoming the fourth state to do so (following South Carolina, Mississippi and Florida). E. S. Dargan’s speech outlines the reason for Alabama’s leaving the United States of America – namely, in order to preserve African slavery.

Alabama’s Ordinance of Secession, declaring independence and issuing a southwide call for a convention of slaveholding states, reads as follows:

AN ORDINANCE
to dissolve the Union between the State of Alabama and other States united under the compact styled “The Constitution of the United States of America.”

WHEREAS, the election of Abraham Lincoln and Hannibal Hamlin to the offices of President and Vice-President of the United States of America, by a sectional party, avowedly hostile to the domestic institutions and to the peace and security of the people of the State of Alabama, preceded by many and dangerous infractions of the Constitution of the United States by many of the States and people of the Northern section, is a political wrong of so insulting and menacing a character as to justify the people of the State of Alabama in the adoption of prompt and decided measures for their future peace and security; therefore,

And as it is the desire and purpose of the people of Alabama to meet the slaveholding States of the South, who may approve such purpose, in order to frame a provisional as well as permanent Government upon the principles of the Constitution of the United States,

Be it resolved by the people of Alabama in Convention assembled, That the people of the States of Delaware, Maryland, Virginia, North Carolina, South Carolina, Florida, Georgia, Mississippi, Louisiana, Texas, Arkansas, Tennessee, Kentucky, and Missouri, be and are hereby invited to meet the people of the State of Alabama, by their Delegates, in Convention, on the fourth day of February, A.D. 1861, at the city of Montgomery, in the State of Alabama, for the purpose of consulting with each other as to the most effectual mode of securing concerted and harmonious action in whatever measures may be deemed most desirable for our common peace and security.

And be it further resolved, That the President of this Convention be, and he is hereby, instructed to transmit forthwith a copy of the foregoing Preamble, Ordinance, and Resolutions to the Governors of the several States named in said resolutions.

Done by the people of the State of Alabama, in Convention assembled, at Montgomery, on this, the eleventh day of January, A.D. 1861.

The seceding Alabama Delegation includes Jabez Lamar Monroe Curry (1825-1903; pictured above), a member of Talladega Baptist Church, politician, and ardent secessionist who remains a committed Confederate throughout the war. Curry is named to the Provisional Confederate Congress and serves on the following committees: Commercial Affairs; Flag and Seal; and Postal Affairs. He holds a seat in the First Regular Congress, chairs the Committee on Commerce, and sits on the Committee on Elections.

Turned out of office, Curry in 1863 is appointed lieutenant colonel in the 5th Alabama Cavalry, commanding the regiment in the latter portion of the war. Afterwards, he enters the ministry as a Baptist preacher, serves as president of Howard College (1865) (now Samford University), and becomes involved in public education, helping establishing a public school system in the former Confederacy.