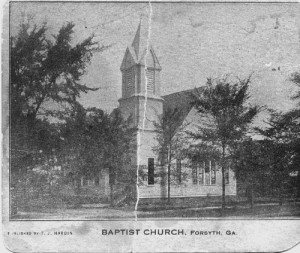 Julia Stanford, teacher at the Forsyth Female College and member of First Baptist Church of Forsyth, again chronicles her thoughts in her diary. She includes rumors of war for which there is no basis of truth, a commonplace occurrence in towns far removed from battlefronts.

This morning – Like most School day mornings, has nothing very peculiar in its duties.

3 P.M. went to Macon to see some Preston friends of the Muchacee Guards Capt. Hawkins 114 in No. They went to Richmond via Augusta. David Invincibles from Albany – Dawson –  Ga. via Atlanta.

Scenes of female degradation not mentioned Harrows my mind. Would I had never witnessed it.

Woman, Woman, can it be that an angel of mercy is filled from a vessel of wrath!

No battles happen at Harper’s Ferry this month. Confederate General Joseph E. Johnston had actually abandoned the site on June 14, believing it indefensible. In July, Union forces occupied Harper’s Ferry. During the remainder of the war, the area changes hands a number of times.

Stanford’s words reveal a willingness, from the perspective of a woman, to sacrifice thousands of the South’s young men in order to obtain victory over the North. No one at this time likely realizes that by the end of a long war, deaths will number in the hundreds of thousands.

Source: “The Diary of Miss Julia A. Stanford” (A copy is available in the Mercer University Georgia Baptist History Depository, Macon, Georgia); “Harper’s Ferry During the Civil War” (link)