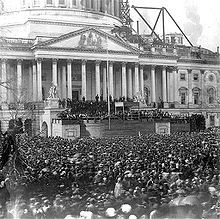 Abraham Lincoln, raised a Baptist, is inaugurated (photo) as the 16th president of the United States of America in front of a partially finished United States Capitol. Reviled by southern white slaveholders as the “Black” president – because of their certainly that Lincoln will put an end to African slavery in the Union – Lincoln’s inauguration takes place one month after the formation of the slaveholding states confederation, the Confederate States of America.

Northerners are hopeful that Lincoln will be able to hold the Union together, with military force if necessary. Black slaves in the South are cheered, if quietly and with apprehension of repercussions in their daily lives, by Lincoln’s election.

Many white Baptists in the South, however, express abject hatred of President Lincoln.

Mary Beckley Bristow, a member of Sardis Baptist Church in Union, Kentucky, sums up the feelings of many Baptists in the South as she comments on Lincolns’ inauguration:

“[Lincoln] has it in his power (for us poor mortals to look at the matter) to do much of good or evil, and if we judge him by the silly, foolish speeches he made on his route and the pitiful, cowardly manner in which he approached the Capitol, slipping there in disguise, we have but little reason to hope for good. I would defy a “Philadelphia lawyer” to guess at what his intended policy will be from his inaugural address, whether he will give us peace by acknowledging the independence of those States that have seceded, now known as the “Southern Confederacy,” or not, as he ought to do, we can give no idea. For my own part I believe he does not intend it. I believe him to be one of those deceitful, hardheaded persons who would overturn a world (if they could do it without personal detriment) to accomplish their fanatical bigotry. I imagine Lincoln to be such a man as the witch burners of Salem, Massachusetts, without Cotton Mather’s sense to go on it, but none the less dangerous because of being feeble-minded. May the Lord, if consistent with his will, save our country from a civil war.”

The hatred of Lincoln shared by many white Baptists in the South will only grow in the coming months.

According to the custom of the day, ladies gathered in the balcony and threw flowers down to the speakers they supported. It soon became apparent that the Unionists had a narrow but unshakeable majority, despite attempts at persuasion by speakers such as Gov. Rector, who stated his belief that: “God, in His omnipotent wisdom, …created the cotton plant, the African Negro, and the lower Mississippi Valley, to clothe and feed the world, and a gallant race of men and women produced upon its soil to defend it and execute that decree.”

Arkansas’s Union majority prevails for now as delegates decide to schedule a popular election in August to decide the question of secession.

Source: Bristow’s 1861 diary (link); the Bristow family by the Civil War was long established in Kentucky, some individuals obtaining prominence in the state, and many members of Baptist congregations (link); Arkansas Secession Convention account (link)