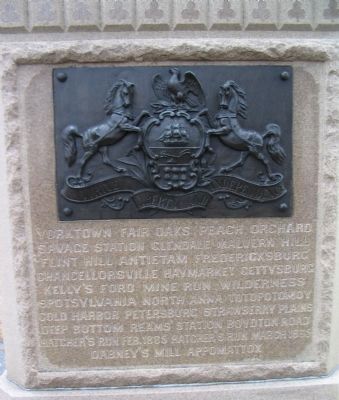 Born on June 23, 1839 in Baltimore, Maryland, John Wheaton Lynch “helped recruit for the 106th Regiment of Pennsylvania Volunteers in 1861. The regiment was mustered in the on August 24, 1861, and John W. Lynch served as a first lieutenant. The 106th saw action at many notable battles, including Antietam, Fredericksburg, Chancellorsville, and Gettysburg. On January 9, 1863, he was promoted to captain, and on September 7, 1863, he was discharged for disability. The disability was a heart condition, which he was thought to have acquired during military service.”

Upon his discharge, Lynch works as a salesman in the the cities of New York, Boston, and Philadelphia. A Baptist, he marries Elizabeth (Bessie) Jillard Mustin of Philadelphia (born April 7, 1837) in the city’s Tabernacle Baptist Church on June 22, 1865. He remains a businessman for the remainder of his career, as the family resides in Boston for a while before moving back to Philadelphia. Lynch dies on April 1, 1907, while Bessie dies in 1918.

Like many soldiers, Lynch writes letters from the camps and battlefronts during the Civil War. Some of Lynch’s letters are preserved, located in the archives of the Historical Society of Pennsylvania.