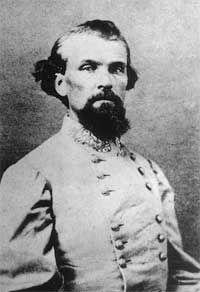 John Richard Mills (1844-1910) of Providence, Kentucky is serving in the Confederate Army.

At the first call to arms in 1861, although only seventeen years of age, he left his home and school, near Providence, Ky., and, in company with several schoolmates, went to Hopkinsville, Ky., and joined a company organized by Capt. J. K. Huey, of Smithland, Ky., which became Company H, 1st Kentucky Cavalry, and became a part of General Forrest’s regiment. He followed the fortunes of the Confederacy until the battle at Fort Donelson, where he was captured. He was sent to prison at Indianapolis, Ind., and after eight months was exchanged at Vicksburg, Miss. He was a man of unbending integrity, yet gentle as a woman, of dauntless courage, yet modest and retiring. He was genial, kind, charitable, generous, the very soul of honor, and a humble Christian.

As a soldier John Richard Mills was brave, prudent, faithful. He never shirked a duty or sought an easy place, he cherished fondly the memory of those glorious days. He enjoyed the Reunions and the companionship of old comrades with whom he had served so bravely in years gone by. He was Adjutant of Hopkins County Camp, No. 528.

He worked faithfully and gave liberally of his time, energy, and means for the erection of the handsome monument which stands on Court Square in Madisonville, Ky., dedicated to “Our Confederate Dead.”

He was a member of the Masonic Fraternity, having been a member for forty years, and for a number of years he had been a consistent member of the Missionary Baptist Church.

Thus Mill’s obituary speaks of his war-time service, Baptist faith, and lifetime commitment to the Confederacy.

Nathan Bedford Forrest, under whom Mills served, made a name for himself during the war as a capable strategist and guerrilla fighter, first distinguishing himself at the Battle of Fort Donelson. Surviving the war, Forrest’s activities fed into the creation of the Lost Cause mythology, a portrayal of the Confederacy’s cause as noble, the Confederacy’s leaders as honorable, chivalrous men, and southern armies as militarily superior to United States armies, suffering defeat only because of the overwhelming numbers of northern forces. Forrest also served as the first Grand Wizard of the Ku Klux Klan, a secret vigilante organization which launched and fostered a reign of terrorism against black freedmen and Republican politicians during Reconstruction in the South.