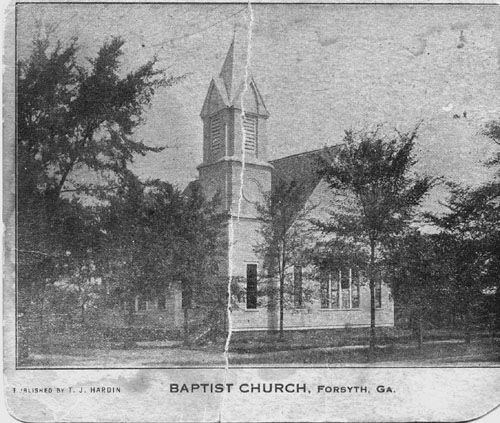 Today in Missouri the (First) Battle of Lexington – also known as the Battle of the Hemp Bales – continues. Having begun on September 13, the battle will continue until the 20th of the month. Taking place in Lafayette County, an area of the state harboring much Southern sentiment, the Union Army faces of with the pro-Confederate Missouri State Guard. The State Guard emerges victorious, with the result being that the Confederacy temporarily gains solid control of Missouri’s River Valley, dealing yet another early  setback to Union war efforts.

Meanwhile, in middle Georgia Julia Stanford attends the Wednesday service of a revival at the First Baptist Church of Forsyth. Her reflections offer insight into the mixture of spirituality and earthly concerns that attend Southern Baptist life during the war years.

Richmond, good news of 6500. Stand of Arms & ten rifle cannon being landed at Savann. by a stell clad vessel of the Confederate States also the coming of 4 more. They will probably raise the blockade of Abe.

Went to Church tonight against my feelings for I was really too much fatigued. Went only to Accommodate others- Perhaps they might & live. The discourse was to me rather more interesting. Yet to some it was serious & solemn. Several mourners went up & some members of the Church.

Stanford’s mention of the Savannah vessel may be a reference to the CSS Atlanta, a southern ironclad, acquired from Scotland and currently en route to Savannah with a cargo of weapons and munitions. Confederate officials, in the face of a growing Union blockade of the South, are desperate to quickly outfit a Southern navy. European ship makers prove to be the only viable option for acquiring war ships.

Of the previous day, Standford writes:

Went to Church tonight. Heard Rev. Jesse Wood preach- “All things ours” He described the Christian as being rich in all things- things present things to come” & ought to be the most grateful & humble- of all persons- After preaching he asked all that claim right to give him their hand- Then those sinners that wished to Claim that promise to take front row seats.

Rest Rest- of body & mind is necessary for health And I must rest more or be willing to die soon. Rec a letter from Mary M- of Suwanoochee a little girl of 9 years Her father belongs to the coast defence. She will come & see me some day she says.

Report of the Capture of a federal Captain in the Hanoha. Hope ’twill not be long till all the Federals will have shared a similar fate.

I am resting so as attend Church tomorrow night when we will have the pleasure of hearing a Cherokee Indian preach.