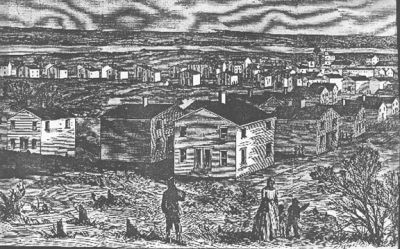 Meeting in Richmond, the Confederate Congress today unveils a new chapter in American history: the first Confederate Conscription Act, requiring all males between the ages of 18 and 35 to serve in the military, becomes the first draft enacted since the formation of the American nation. The Act follows the Rockingham Rebellion and is considered necessary to combat increasing desertions, and mandates harsh penalties for deserters. The Act also automatically reenlists one year volunteers for three additional years of military service, enraging many soldiers. On the heels of the declaration of martial law in Richmond, the Conscription Act further signals that Confederate officials are willing to sacrifice individual (white) rights in the nation’s fight to retain the institution of African slavery.

Meanwhile, today U.S. President Abraham Lincoln signs into law an act freeing the 3100 slaves in the nation’s capital, a former center of the slave trade. Lincoln’s District of Columbia emancipation act provides financial renumeration to slave owners and offers freed slaves the opportunity to emigrate to former slave colonies in Africa, with cash to assist in transportation. By the end of the year, many former slaves act on the emigration opportunity.

The act is similar to that which Lincoln had offered to Upper South states earlier in the war, but which had been refused. It also presages the South-wide Emancipation Act that Lincoln will announce later this year. Committed to freeing slaves, Lincoln has chosen to do so methodically and incrementally. For now, the freeing of D.C.’s slaves takes place alongside a military policy of freeing southern slaves (“contraband”) upon army occupation of southern towns, which thus far is largely confined to the Upper South, Tennessee, and coastal areas throughout the South.

The newly freed slaves in the District of Columbia who choose to stay are initially housed in the old Capitol building, but an outbreak of disease leads to a search for more permanent housing. Eventually, a Freedman’s Village is established in Arlington, on the former grounds of Robert E. Lee’s estate.

There, freedmen work during the war and in the years following, raising food and earning wages. Several churches, including a Baptist congregation, minister to the needs of residents.The Baptist church is the Mount Zion Baptist Church (originally “Old Bell Church”), founded in 1866 within the Village. The Village closes by the end of the century, and Mount Zion relocates and remains open to this day.