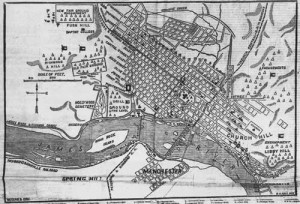 Georgia Baptists this week read about life in the Confederate capital of Richmond following the recent Confederate victory over U.S. General McClellan’s Army of the Potomac, as described by an editorial in the Christian Index.

Our capital is surely not a place for pleasure seekers, at this time.

Crowded with visitors from all parts of the country in search of sick, wounded or killed friends, sleeping apartments are difficult to procure. And, as can well be imagined, provisions are scarce. Hotels apologise for the scantiness of their bill of fare, and yet charge $3.50 per day, while their tables barely attain to respectability. Private families that take in boarders, charge $2.50 per day, and even then compel some of their guests to sleep on the floor. During one entire morning we sought a room at various private boarding houses without success.

The stone, pavements and brick houses retained and diffused oppressive quantities of caloric, and, consequently, the heat of the city was intense.

As a matter of necessity much muddy river water is drunk; and where well water is procured, it is so impregnated with alum or other deleterious substances, as invariably to inflict strangers with diarrhoea; and with this complaint, thousands of our soldiers are constantly suffering.

Soldiers, soldiers, soldiers, greet the eye at every turn; and this alone, sufficiently reminds one of the existence of horrida bella. But when hundred of those poor, pale fellows, in weakly condition are seen perambulating the streets: when hospitals are visited, wherein lie thousands of our gallant wounded; and when the cemetery, with its many interments, are visited, one fairly realizes something of war. Companies of dirty, ragged troops were constantly passing through the streets, all looking jaded, weary and worn out, seemingly more desirous of rest and sleep than of aught else; and no sooner is a halt ordered, than bright barreled guns are leaned against a house, and the weary fellows, throwing themselves upon the hard pavement, soon become oblivious to outward circumstances.–Go where we would, we saw sleeping soldiers: first they would sit, and soon reclining, all forgetful that were in a crowded thoroughfare, and that crowds of passers-by were stepping over their bodies, they would sleep on, perhaps dreaming of homes and far distant dear ones. The beautiful and shady Capitol Square was thronged with them, and, ever, they seemed seeking the coveted repose. Oh, those terrible seven days of marching and fighting! Little does the country recognize the debt of gratitude due to our noble, suffering and self-sacrificing soldiers!

….Uniforms–we saw none. Our men are glad to get any kind of clothes, and presented as motley a crew as e’er was seen. Hats and garments of all hues, kinds, shapes and material they wear; and generally, they present the most unmilitary appearance, as far as dress goes. But their guns are fondly and carefully handled and protected. Officers were uniforms: but mostly, if would appear, as a badge of office. The number of officers, apparently in good health and spirits pained us, especially as we understand that for Captains and Lieutenants to get a sick leave and lounge about the hotels, just before a battle, is most common. In this way many have risen in the ranks to be Colonels and Lieutenant-Colonels, without having been under fire–simply by the death of superior officers. General Lee, however, by late stringent orders has forbidden all furloughs. Even soldiers, three miles from the city, were unable to gain access to it, for the purpose of buying clothes; for it is the usual practice in the army to wear clothes out and then buy new–ignoring the cleansing properties of soap and water altogether, unless stationed in camp and recruiting and, therefore, off duty.

We have been asked concerning the morals of our soldiers: they receive tracts and Bibles, and papers most willingly, and read them with avidity: profanity is common: drinking is the common fault all, when liquor can be procured, but this is seldom: in licentiousness, soldiers who visit the city spend much money; and tobacco seems to be a general favorite.–But in morals our army is a thousand percent superior to the Federals. We saw daguerreotypes of negresses that were taken from the pockets of dead Yankees; and one contained both the likeness of the Yank and his dark-skinned paramour.

In Winchester, it was common for Federal officers to parade the streets, arm in arm, with colored women, much to the disgust of our Southern ladies.

Main street, the Broadway of Richmond, is always crowded, four out of five passengers being soldiers. Many of them are stragglers and many have “run the blockade,” that is, avoided the sentinels, and entered the city without leave. The Provost Marshal was capturing them by the hundred and immuring them in the Godwin Castle: but, with pride we noticed that among the long list of the names of such stragglers thus published for reclamation, very few were Georgians, and those belonged to the regular army, and not to the volunteer regiments.

….We saw miles of deserted camps, with tents still standing (only ripped down the side by sabre strokes,) together with thousands of garments, war accouterments, spoiled provisions, ruined guns, telegraph wire, fixed ammunition and had been buried, and various other things. There is no doubt in the world but that the most precipitate retreat only saved the army from utter rout, and that our victory was a most glorious one….

A singular result of our late visit to Richmond is the entire removal from our mind of every doubt as to the perfect ability to defeat our would-be subjugaters and gain our independence. We no more doubt our early and complete success than we doubt the existence of our army in Virginia; and we no more apprehend subjugation by the Yankees than we do by the Mexicans….

We heartily regret the unnecessary distracting influence we have permitted the war to exert upon our life, our feelings and devotions; and we are determined, hereafter, with God’s help, partly to ignore the war and address ourself more sedulously to the great object of life–preparation for eternity…we do heartily and seriously urge our readers to dismiss, at once and forever, all distrust in the goodness of God from their hearts, and regardless of the war, enter into a vigorous performance of every christian duty. We implore that no more time be lost in waiting to discover what the course of God’s providences will be. We dare affirm most unhesitatingly that our independence is already gained–the Secessia is a power on earth, and that, beside the harassing pangs we feel for lost and suffering friends, we suffer temporary inconveniences only. Of course exception is made when we think of the regions now confronting the seat of war. As a nation most of our sufferings are imaginary or merely prospective….

Let christians be grateful and cast all uneasiness from their minds….

In the coming months, proper uniforms become more characteristic of many soldiers. Weariness, sickness, and unauthorized leaves of absence, however, remain a problem within the Confederate Army. In addition, and despite the advice dispensed, Southern Baptist newspapers and leaders prove woefully incapable of ignoring the war in the months and years ahead.

Not mentioned is the common practice of Southern slaveowners taking female African slaves as mistresses, often resulting in the bearing of mixed-race children. Public acknowledgment of such evil would tarnish the South’s godliness, perhaps imaging the South as more even sinful than the negro-loving North.