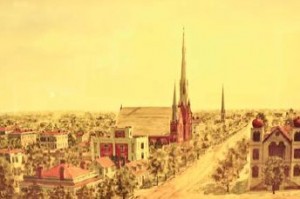 The North Carolina port town of Wilmington, a quiet community of some 10,000 persons on the eve of the war, has been transformed into a center of “profiteering and money-laundering” that is a magnet for speculators, “rogues and desperadoes,” “crooks, confidence men, and prostitutes.” Many residents have fled from their homes to safer and more wholesome locales.

The cause of the remarkable transformation of Wilmington is the business of blockade running. Located twenty-eight miles inland from the mouth of the Cape Fear River, well out of range of Union Navy guns, guarded by Fort Fisher, and connected to the interior by rail lines, Wilmington is now the main Confederate port on the Atlantic Ocean and the primary destination of blockade runners operating out of the Bahamas.

There is much money to be made in the risky business of running goods through the Union blockade of the Southern coast. The vessels which successfully navigate the seas and slip past Union warships bring much-needed food, clothing, supplies and equipment for civilians and soldiers. North Carolina is thus able to better feed, cloth and equip soldiers than any other Confederate state. In return for their daring deeds and reflecting the exorbitant prices of their furtive wares, the agents and employees of the blockade running companies live in “magnificent style.”

Today is yet another day in the life of profit-driven Civil War-era Wilmington. Or so it seems.

The blockade runner Kate steams up the Cape Fear River and docks at 2 p.m. Supplies are unloaded and auctioned off, adding to the wealth of the Kate’s owners and employees, as well as local speculators. Huge profits procured by a relative few are poured into liquor, pressed into the hands of women for hire, and otherwise used to purchase pleasures and comforts. In time, Kate’s cargo filters into army camps and citizen’s homes, after money exchanges hands a number of times.

Soon, the blockade runner, emptied of goods and reloaded with cotton and other goods, departs Wilmington for distant parts.

Yet as Kate departs, something else has been quietly unloaded from the vessel, an unseen cargo that soon impacts the entire town in an unanticipated, and deadly, way: yellow fever.

John L. Pritchard, pastor of Wilmington’s First Baptist Church (founded in 1808 and the new facilities, yet unfinished, begun in 1860), witnesses what happens next. As recorded in his memoirs, edited by Biblical Recorder editor James D. Hufham:

It did not spread at first—was not acknowledged by the physicians—was not even suspected by the mass of the people. Still it crept insidiously about among the habitations of the poor and amidst the urlieus of the wretched. An uneasy feeling at length began to prevail. There was a singular increase of certain types of fever—a continually increasing mortality in the physicians’ lists, until at the end of August people began to enquire into the causes. Still the idea of yellow fever in Wilmington was ridiculed—it was simply absurd.

Thus time wore on, the uneasiness growing, the mortality increasing until the 13th of September, when the point was conceded, and on the 17th Dr. Dickson, one of the leading physicians of the city and himself soon to become one of the victims, reported five cases treated by him. Two days later he reported three more cases, making eight, of whom six died. The way being opened, the physicians began their regular reports, and in a week twenty-six cases and nine deaths were given as the total. With the acknowledgment of the disease and the dread confirmation of those dim forebodings which had made the community restless for weeks, one of those senseless panics, which every one can argue away and so few withstand, set in, and all who were able to get away left at once. For several days the railroads and the high-ways leading from the city were crowded with families seeking safety in flight. This increased the anxiety and alarm of those who remained. The weather was very warm and rain set in. Aided by these causes the disease spread rapidly, and for the week ending October 3rd, 267 cases and 82 deaths were reported. The following week there were 395 cases and 40 deaths. This falling off in the mortality led the people to believe that the disease had culminated; but their hopes were rudely dashed to the ground when the following week footed up 431 cases and 102 deaths, and the week after, 194 cases and 111 deaths. Here the pestilence seemed to have spent its force and rapidly declined: the next week to 116 cases and 40 deaths; then to 47 cases and 30 deaths; then to 21 cases and 21 deaths; the number constantly growing smaller till the fever disappeared.

These statistics include only the white persons who died in Wilmington. Many who fled, bore the seeds of the disease with them to their places of refuge and there died. The negroes were spared at first, almost universally, but towards the close the mortality was greater among them than among the whites. About 150 deaths of blacks are reported.

….Every family deplored the fall of some of its members or connections. In some instances whole families were stricken down and followed each other in rapid succession to the city of the dead.

Some 6,000 residents flee the city as the disease worsens. The deaths continue through November. John Pritchard, who has stayed behind to minister to his remaining flock, dies on November 14.

The war goes on and on. Finally, following the fall of Fort Fisher, on February 22, 1865–mere months before the war will end–Wilmington is captured by Federal forces.

For the white Baptists of the city, the aftermath of the war is perhaps as harsh as the war itself. Not until 1870 does First Baptist Church finally complete the building project started ten years earlier.