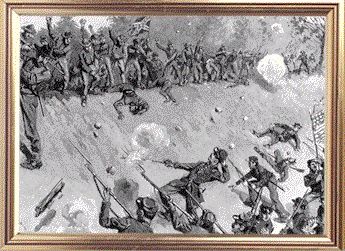 Today, Pope attacks Jackson along an unfinished railroad grade. The Confederates repulse the federals, but at a heavy casualty count for both sides. At midday, Confederate General James Longstreet arrives and begins forming on Jackson’s right flank. Meanwhile, the fighting subsides this afternoon.

The following day, Pope attacks again, seemingly unaware that Longstreet’s reinforcements are in place. In response, Longstreet’s wing of 28,000 men counterattack “in the largest, simultaneous mass assault of the war.” The Union left flank crushed, Pope’s army is driven back to Bull Run.

Fortunately for the Union, an orderly and effective rearguard action late in the day prevents the Confederates from entirely overrunning their forces, as had happened with then-green soldiers in the First Battle of Bull Run. The Confederates do not follow up as darkness arrives, allowing Pope to further consolidate his remaining forces. When Jackson pursues Pope the following day under orders from Lee, Pope is ready and effectively counters the attack.

While the Confederates handily win the Second Battle of Bull Run, casualties for both sides are significant. In the clash between 50,000 Confederate soldiers and 62,000 Union troops, 8,300 and 10,000 respectively are wounded or killed. Many Baptists are killed or wounded on both sides of the conflict.

On the Union side, in the coming days Pope is criticized for his ineffectiveness, and relieved of command on September 12. Meanwhile, after the battle Longstreet and even Jackson come under criticism for not being aggressive enough in the hours after gaining the upper hand on Pope.

For the moment, however, the Confederate victory in this major battle further lifts the hopes of the South, while leading to anger in the North and denying Lincoln the victory he needs in order to announce his emancipation proclamation.