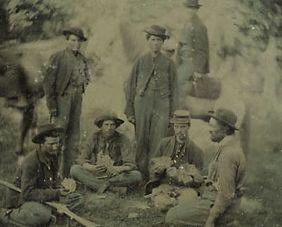 Card Playing in the Camps

Many Baptist churches throughout the Confederacy hold monthly business meetings this weekend, the first of the month. One of these congregations is the Van Wert Baptist Church in Paulding County, Georgia. Van Wert is the county seat of recently-created Paulding County. The county and town share a common story in terms of their names, the former (founded in 1832) named after John Paulding and the latter (incorporated in 1838) named after Isaac Van Wert–two men who aided in the capture of Major John André, an ally of Benedict Arnold during the Revolutionary War, and a traitor.

Established in 1840, the Van Wert Church was the result of several Baptist pioneer families settling in northwest Georgia and “desirous of being constituted into a Church.” The original members adopted a statement of faith not unlike that of other contemporary, rural Baptist congregations being established in other frontier areas of the South.

Articles of Faith or Constitution for the regular Baptist Church, constituted at Van Wert, this 20th Day of June, 1840.

1st. We believe in one True and Living God, and that there is a Trinity of persons in this Godhead, The Father, the Son and the Holy Ghost, and yet there are not three gods but one God.

2nd. We believe the scripture of the Old and New Testament are the Word of God and only rule of faith and practice.

3rd. We believe in the Doctrine of Original Sin and Universal Depravity of the human family, and of man’s inability to recover himself from the fallen state which he is in by his own free will and ability.

4th. We believe in the everlasting love of the God to his people.

5th. We believe that sinners are justifiable in the sight of God by the Righteousness of Christ imparted unto them.

6th. We believe that true believers in Christ will persevere to the end of their lives and none of them will be finally lost.

7th. We believe that good works are the fruit of faith and follow after justifications.

8th. We believe that there will be resurrection of the dead, and a general judgment, and that the happiness of the righteous and the punishment of the wicked will be Eternal.

9th. We believe that the visible Church of Christ is a congregation of faithful persons who have gained Christian fellowship with each other and have given themselves to the Lord and one another and have agreed to keep up a godly discipline agreeable to the rules laid down in the Gospel.

10th. We believe that Jesus Christ is the Great Head of the Church and only lawgiver and that the government is with the Body and is the privilege of each individual and the discipline of the Church is intended for the reclaiming of those members who may be disorderly either in faith or practice and must be faithfully kept up for the Glory of God and the harmony of the Church.

11th. We believe that water baptism and the Lord’s Supper are binding ordinances and are to be continued until his second coming, and immersion only is Baptism and that true believers are the only subjects.

12th We believe that no minister has a right to administer the ordinances of the Lord’s House, only such as has been legally set apart to the work of the Gospel ministry.

The Van Wert Baptist Church shares two notable characteristics with many other Southern Baptist congregations: Calvinstic theology (see #s 3, 5, 6 and 7 above) and a commitment to discipline (#s 9 and 10). Of the latter, in short, “godly” and “Gospel” discipline is designed to reclaim “disorderly members” in order to ensure “the Glory of God and the harmony of the church,” the language reflecting the Calvinist belief that the one true purpose of the lives and actions of persons chosen by God for salvation is to bring “Glory to God.” Calvinism and strict discipline, in short, tend to go hand-in-hand.

“Discipline” referred to personal sins, while discipline cases represented the lone instances in which church business meetings discussed activities outside the sphere of the church (that is, most members sinned not in the church building, but rather in their homes or communities). In practice, discipline cases were commonplace, yet offending church members who repented of charged sins were, more often than not, forgiven–as long as they refrained from such sin in the future. In addition, despite claiming to pattern discipline after the “Gospel,” many actions that could result in discipline had nothing to do with the Bible, such as: dancing, playing certain musical instruments, playing cards (or other games), or visiting a non-Baptist church. Of course, many matters of discipline were biblical sins, including intoxication, sexual immorality, and divorce.

These generalizations hold true for most rural Southern Baptist churches until the coming of the Civil War, at which time 1) many church business meetings begin taking formal notice of the outside world, and 2) discipline cases become more complex (especially in regards to slave members, as well as the issues of alcohol and game playing–some Baptist churches during the war, in the face of commonplace alcohol abuse in the army camps, began transitioning from a position of tolerance of alcohol apart from drunkenness, toward a position of total prohibition; a hardening of views against card playing is also discernible, again, against the backdrop of a prevalence of card playing in army camps). The Van Wert Baptist Church represents these local congregational shifts that take place during the war.

In July 1861 the church’s business meeting minutes note: “Agreed to meet in the morning at 9 o’clock, engage in prayer and thanksgiving to God for his protecting care of our soldiers at a recent engagement in Manassas.” The Van Wert Church is one of hundreds of Baptist churches in the South that accommodate the war inside their church walls following the Confederate victory at Manassas, and also refer to the war in later church minutes.

During the same July 1861 business meeting, church minutes note: “Brother Heaton reported that he had had a conversation with Brother G. L. Rentz in relation to a difficulty. Brother Rentz confessed sorrow. Church forgave him.”

The Rentz family is the most prominent family in the Van Wert church, with the offices of deacon and church clerk often held by family members. In late 1861 or early 1862, G. L. joins the Confederate Army, and the “difficulty” relating to G. L. of the Rentz clan seems to be resolved.

In the army, however, G. L.–perhaps already a troubled young man–apparently falls prey to the vices that Southern Baptist leaders have long warned are far too numerous among the defenders of the Confederacy. Van Wert Baptist’s March 1862 minutes succinctly tell the sad tale of G. L. in the army: “Brother G. L. Rentz was charged with playing at cards and dancing. Brethren Pearce and Heaton appointed to write to him (in our Army) in relation to the same.“

Thus begins a typical prolonged period–made all the longer by the distance in communication–of a Baptist congregation seeking to elicit an apology from a wayward church member. The first letter to G. L. either does not receive a response, or the reply is deemed insufficient. In July, church clerk John A. Rentz writes a letter to G. L., the second church correspondence. Whatever transpires–and the record offers no hint of the details–G. L. ultimately chooses card playing and dancing over the wishes of his home congregation.

The minutes of the church’s business meeting of December 7, 1862 simply state:

With this entry, G. L. Rentz henceforward disappears from church records. Meanwhile, Van Wert Church minutes end in 1870, and in 1879 the congregation merges with the Rockmart Baptst Church to become the First Baptist Church of Rockmark, Georgia (Polk County). A few decades later, by the early 20th century, Baptists’ traditional stance of temperance in regards to alcohol is rapidly giving way to abstinence, while church discipline is practiced on increasingly rare occasions. In addition, as congregational discipline fades away, so does Calvinistic theology in Southern Baptist churches.

Southern Baptist prohibitions against card playing and dancing, however, largely remain throughout much of the century.