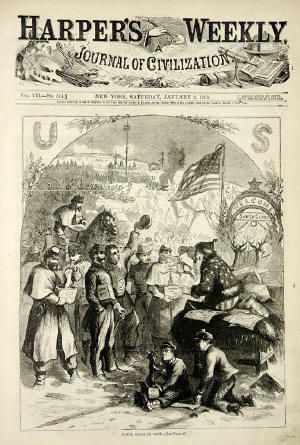 Christmas is not yet a national holiday, nor do Baptists North or South recognize the day as either a holiday or a holy day. However, the era of modern Christmas celebrations is presaged with an illustration by illustrator and cartoonist Thomas Nast, who this holiday season publishes in Harper’s Weekly what is considered to be the first definitive representations of St. Nick, the forerunner of Santa Claus. Nast depicts Santa Claus visiting Union camps, handing out gifts to soldiers.

The day is celebrated in various ways in army camps North and South, with games often holding center stage. Climbing greased poles and chasing greased hogs are several of the favorite activities of the day. Another game, however, is perhaps the favored sport of soldiers.

Since the beginning of the war, baseball has become quite popular in army camps. On the baseball diamond, soldiers and officers are on equal footing as the war is forgotten about for a short time. Today, a baseball game in Union-controlled Hilton Head, South Carolina marks the occasion of perhaps the biggest attended sporting event of the nineteenth century. Up to 40,000 spectators watch the 165th New York Volunteer Regiment (Zouaves) play ball against a team comprised of men from New York’s 47th and 48th regiments. “The 165th players wore a distinctive uniform — red balloon pants, ornamental cloth jackets, white spats, and fezzes with blue tassels.” One of the players is Abraham G. Mills, later president of professional baseball’s National League.

Meanwhile, many soldiers take the opportunity to write home, as does this Union soldier:

You see my paper don’t have the regulation picture on it of Soldiers in file or in battle array I am tired of such flummery. The meaning of the whole thing is to make money for the inventor and not for the soldier. We are told that the life of the Nation is at stake, and every fellow that enlists offers himself as a martyr to save his country. I was thinking these things over last, about 2 P. M. in the morning when I was nearly froze and the relief guard came round and I was off duty to go to my tent and get some sleep. It seems like foolery to the common soldier that for two hours we must stand in a temperature of 30 or 40 degrees when we are a thousand miles from the enemy. I had to walk and walk to keep from freezing. The mercury was down near 40 below zero and the guard house where we sat down between reliefs or lay down was little better than out doors. The health of our Regiment is none too good. One man dies on an average every day. As I write this letter the drum is beating. The food we get is too blame for our bad health. The boys threaten a riot every day for the bad beef and spoilt bread issued to us and all this in our home state of Wisconsin. I went to meeting yesterday both morning and evening. In the morning at the Baptists in the evening at the Episcopal church. The preacher discussed the state of the Union. I thot he talked a bit like a traitor. He was sorry the states should go to war over the question of slavery. He hoped the Union would be preserved and he thot Uncle Tom’s Cabin was much to blame for the war. Capt. Dwarwin said the preacher ought to live in South Carolina. There is talk that we will get pay to morrow. I have sent a record of our company home. Hope you got it I shall send you a lot of clothing just before we leave. Remember me to Uncle Edward Cartwright. It was kind of him to ask so often about me. I wonder where Ez and Ed are. They don’t say a word. You remember they went in the 2nd Calvery.

I am glad father had such good luck getting deer this fall, you will have lots of venison this winter. It is too bad the Elk are all gone or killed off I know father is sorry. He blamed the Sioux Indians for scaring his game but the St. Louis hunters and the Farringtons of Mondovi have spoiled his hunting more than the Indians. I hope he will stop hunting bears alone. Its a dangerous business. Old Prince is a dear good dog but a bear is too much for him at close quarters. Is his jaw all right again? Every letter I get from home I expect to hear of Jenny’s death. She is bound to rub her red blanket off in the brush and the first hunter that sees her will shoot her for a wild deer. I wonder what Claffin’s people tho’t when she ran in their bedroom and laid down to get away from the dogs.

Poor thing eight miles from home with no friend near, raced by dogs, until her tongue hung out, and to save her life rushed into the open door of the Claffin home. Poor Jenny Deer. With four bullet marks on her legs and body and one thru her red blanket, and the damned dogs racing her for life. Poor thing. Poor thing. I can’t help it, but these things make me homesick.

From Your Son
CHAUNCEY.

On the home fronts, joy is tempered with the absence of loved ones serving in the armies. Many Baptists, however, ignore Christmas, often perceived by Protestants as a popish and pagan holiday (the latter referring to the day’s roots in ancient paganism). In Pennsylvania, some Baptists honor Christ by gathering to form a new church, the Temple Baptist Church of Pittsburgh.

In 1852, seven German Baptists arrived in Pittsburgh from Cassel, Germany. Settling in the south side district, they prevailed upon the Rev. S. Sala to preach to them for a period of one year. By 1858, the group had increased in numbers, but they then united with the Union Baptist Church, considering themselves as the German department of that church. On December 25, 1862, this group organized themselves into the German Baptist Church. The first house of worship was dedicated May 14, 1865.

The war is far from over this holiday season, and yet something new has been birthed that will outlast both the great conflict and the new Baptist meeting house and is destined to become as integral a part of America as is baseball: Santa Claus, who will, within a few decades, be beloved by American children.