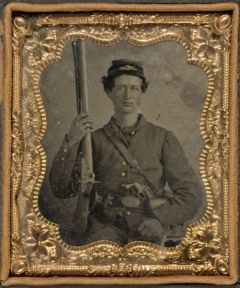 A sad and unfortunate accident takes place this weekend at the Baptist church in Keene, New Hampshire.

A serious accident happened … to Algernon Hill, a son of Mr. Joseph Hill of this village, a boy about sixteen years of age. Mr. Hill is sexton of the Baptist church. Immediately behind the church is Mr. Geo. O. Leonard’s gun-shop, and it has been customary for years for persons to practice at a target set up against the back of the meeting house. Late on Saturday young Hill entered the basement of the church by a rear door for the purpose of getting shavings to kindle the fire, and just as he emerged with them in his arms, he passed before the target and received a ball from the rifle of Mr. Leonard, who was so engaged in sighting: that he did not notice the sudden appearance of the boy. The ball passed through both legs, just above the knee, fracturing the bone in the first.

Initially, the life of the boy seems in question, but he does survive.

George Leonard, remorseful for the accident, is a man of some prominence. An accomplished gunsmith from Vermont, in 1859 Leonard had relocated to Keene and opened his gun shop near the Baptist church. When the Civil War began, Leonard ramped up his rifle production, crafting rifles for Union Army sharpshooters. His rifles were known for their fine quality and unusual accuracy at long distances. One of Leonard’s rifles used at Gettysburg is today on display at the Gettysburg National Battlefield museum.