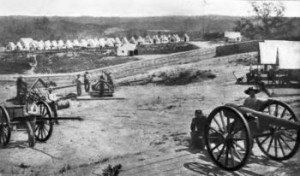 Abner Doubleday, destined to be known in modern mythology as the father of baseball, is one of the more prominent officers in the Union Army. From a Baptist family, Abner’s brother Thomas is also of Baptist stock, their father having been a New York politician, prominent Baptist layman, and Baptist author.

Abner played a leading role in the Battle of Fort Sumter, the opening act of the war, and is a Major General. Now, the spotlight is on Thomas, who marches forth to Washington leading New York’s First Heavy Artillery Regiment, as noted by today’s New York Times:

The First New-York Heavy Artillery regiment, Col. T.D. DOUBLEDAY, which has been quartered at Port Richmond, Staten Island, for some time past, embarked on board the steamer John Potts for Amboy, in route for Washington. This regiment has been enlisted especially for garrison duty in or near Washington. It is understood that one batallion will be assigned to Fort Greene, and the other to Fort Corcoran, both of which are in Virginia. In the list of officers published a few days ago in the TIMES, there were a few vacancies which have been filled as follows In Company F, Edward A. Tudor has been appointed Captain; in Company K, Wm. Waterbury and D.K. Smith Jones have been chosen Second Lieutenants; in Company H. George Bliss has been appointed Captain, J. Henry Thorp, First Lieutenant, and Edward C. Knower, Second Lieutenant.

Later known as the 4th New York Heavy Artillery, the unit serves throughout the remainder of the war, principally in defense of Washington, D.C. and surrounding area, mustering out September 26, 1865.