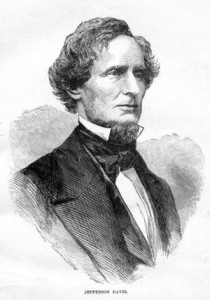 In the ceremony, the Confederate president uses a Bible given to him by a well-known Baptist: James R. Graves, editor of the Tennessee Baptist. Prior to the ceremony, Davis refers to the Bible in a letter to Graves:

The Bible is a beautiful specimen of Southern workmanship, and if I live to be inaugurated the first President of the Confederacy on the 22nd of February next, my lips shall press the sacred volume which your kindness has bestowed upon me.

The letter circulates widely, to the point that the London Times writes of the Confederate president’s promise to kiss the Bible.

Against this backdrop, Davis appeals to Providence and calls upon God in his inaugural address:

On this the birthday of the man most identified with the establishment of American independence, and beneath the monument erected to commemorate his heroic virtues and those of his compatriots, we have assembled to usher into existence the Permanent Government of the Confederate States. Through this instrumentality, under the favor of Divine Providence, we hope to perpetuate the principles of our revolutionary fathers. The day, the memory, and the purpose fitly associated.

It is with mingled feelings of humility and pride that I appear to take, in the presence of the people and before high Heaven, the oath prescribed as a qualification for the exalted station to which the unanimous voice of the people has called me. Deeply sensible of all that is implied by this manifestation of the people’s confidence, I am yet more profoundly impressed by the vast responsibility of the office, and humbly feel my own unworthiness….

This great strife has awakened in the people the highest emotions and qualities of the human soul. It is cultivating feelings of patriotism, virtue, and courage. Instances of self-sacrifice and of generous devotion to the noble cause for which we are contending are rife throughout the land. Never has a people evinced a more determined spirit than that now animating men, women, and children in every part of our country. Upon the first call the men flew to arms, and wives and mothers sent their husbands and sons to battle without a murmur of regret.

It was, perhaps, in the ordination of Providence that we were to be taught the value of our liberties by the price which we pay for them.

The recollections of this great contest, with all its common traditions of glory, of sacrifice and blood, will be the bond of harmony and enduring affection amongst the people, producing unity in policy, fraternity in sentiment, and just effort in war….

With confidence in the wisdom and virtue of those who will share with me the responsibility and aid me in the conduct of public affairs; securely relying on the patriotism and courage of the people, of which the present war has furnished so many examples, I deeply feel the weight of the responsibilities I now, with unaffected diffidence, am about to assume; and, fully realizing the inequality of human power to guide and to sustain, my hope is reverently fixed on Him whose favor is ever vouchsafed to the cause which is just. With humble gratitude and adoration, acknowledging the Providence which has so visibly protected the Confederacy during its brief but eventful career, to thee, O God, I trustingly commit myself, and prayerfully invoke thy blessing on my country and its cause.

Meanwhile, this same day in Washington, the U. S. Senate gathers in response to a petition from the citizens of Philadelphia to read George Washington’s 1796 Farewell Address on the 130th anniversary of the first president’s birthday. The official petition to read Washington’s Farewell Address had been made by Tennessee Senator Andrew Johnson, who declared:

In view of the perilous condition of the country, I think the time has arrived when we should recur back to the days, the times, and the doings of Washington and the patriots of the Revolution, who founded the government under which we live.

While today’s dueling ceremonies both pay tribute to freedom, only one stands the test of time: the Confederate States of America dissolves long before Davis’ six-year term is fulfilled, while the annual reading of Washington’s Farewell Address continues to the present day.