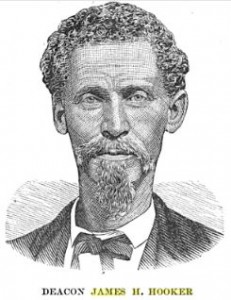 Amidst the war, the First African Baptist Church of Savannah, Georgia continues to thrive. Many African Baptists prefer to attend all-black congregations, although even then white ministers maintain a hand in overseeing the operations of such congregations in the South.

Savannah’s First African Baptist congregation is comprised of both enslaved and free Africans. The church has a large degree of autonomy in matters spiritual, even as racial tensions in the city are running higher due to the presence of the Union Navy up and down the southeastern coastline.

Today, the First African Baptist Church participates in a ritual common to Baptist congregations North and South: baptism. James H. Hooker, a native of the city, is baptized into membership. He serves the church throughout the tumultuous war years and for decades to come. A biographical sketch of Hooker, penned before his death, speaks of his commitment to the church:

Deacon James H. Hooker was born in Savannah, Ga., January 30th, 1835, and was baptized into the fellowship of the First African Baptist Church January 2, 1862, by Rev. W. J. Campbell. He was elected deacon of the church November 25th, 1877. He was the same day elected treasurer of the church. He was elected trustee of the church December 16th, 1877. As a deacon Mr. Hooker is blameless, humble, loving and very kind. He reverences the church of Christ. He has a good report by them that are without. The members have unbounded confidence in him. No man in Savannah stands higher than Deacon Hooker. He is a man of few words, but of a princely, large heart. He was with the majority during the church trouble. During this time he was elected to offices already mentioned. He comes as near as frail man can meeting Paul’s requirements of a deacon. As a treasurer, he is pure, and not even a whisper of his ever having done wrong with the money of the church. Every cent was accounted for to the fullest satisfaction of the church. He would be treasurer to-day but for a severe attack of pneumonia and nervous prostration, which the doctors declared unfitted him for any responsible office; that he could not stand the care of this office, and so he resigned, to the regret of the church. As a trustee, he is honest, wise and faithful. The interest of the church cannot suffer in his hands. He believes that God ordained that he should fill these offices, and hence he fills them as in the sight of God. If all of our officers in all the churches were to feel this way our churches would be a power in the world. He was ordained as deacon December 6th, 1885, by Revs. E. K. Love, U. L. Houston and S. A. McNeal. Deacon Hooker is still alive, exerting a powerful influence for good. He is a man of means and rules well his own house. He scarcely finds time to visit any other church when his church is open. Deacon Hooker owns a fine brick residence, and lives in comfort and ease.

Hooker’s tenure as a congregational leader traverses the time frame in which African Baptist congregations of the South obtained full autonomy in the post-war era and set about establishing their own methodologies and practices, unhindered by white overseers. By the end of the nineteenth century, African Baptists of the South were also engaged in the creation of national structures, providing the denominational foundations for great successes of the twentieth century.