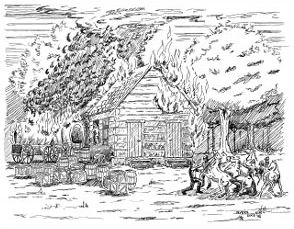 The previous September, John Hunt Morgan, attempting to smuggle clothing to the Confederate Army, had been detained in the church building by the Union Taylor County Home Guards. Now a Confederate Cavalryman, today Morgan and a small contingent of fellow Confederate soldiers return to Taylor County, disguised in Union uniforms. Morgan wants revenge, and he is looking for Union telegraphers who are known to be in the area stringing Federal telegraph lines, following the nearby Union victory at the Battle of Mill Springs.

With the element of surprise on his side, Morgan’s men capture 24 linemen, along with their wagons and horses. They also capture a local miller, John Feather. Locking Feather inside the church building, which was being used by the Union linemen as storage for supplies and food, Morgan sets the building on fire.

Feather manages to escape from the burning church, while Morgan takes his captives to Tennessee, where he eventually releases them.