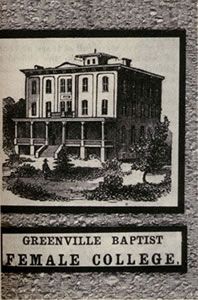 Many institutions of Southern Baptists, battered by the drain of human and capital resources due to the war, have been forced to shutter their doors. No where is this more evident than in South Carolina.

Baptists of the Palmetto State, ardent supporters of waging war to preserve African slavery, remain committed to the Confederacy. Yet Union forces are in firm control of the coast of the Confederacy’s founding state, their occupation having brought exports to a standstill, resulting in a deepening economic recession. The Southern Baptist Theological Seminary in Greenville mere months ago had been forced to close due to a lack of students–most of whom had marched off to war–and funding. This month, South Carolina Baptists’ Furman University closes its doors for the same reason.

Today, university trustees meet and make arrangements to retrench by focusing on a primary school for boys and their Greenville Baptist Female College (in effect, a finishing school in which women students were taught to maintain a quiet, subservient demeanor and prepared for lives as wives and mothers).

The Board met at the call of the President. Prayer by Brother Hinton.

The Committee on the report of the Faculty submitted their report, as follows:

Your Committee, while they regret the necessity which has compelled the suspension of the exercises of the University — to wit, the enlistment of the young men in the army — cannot but admire the patriotic devotion to their country’s cause, which they have thus evinced. They approve of the establishment of the school for boys, which is now in operation, chiefly under the direction of Professor Edwards, and trust that it may continueto increase in numbers. With reference to the fact stated in the report of the Faculty, that in consequence of a reduction in the corps of instructors in the Female College, and in compliance with an application by Professor Twitty, Professors Furman and Judson had engaged as assistants in that Institution, the Committee concur in the propriety, under present circumstances, of such a direction being given to the labors of those brethren; and they would respectfully suggest that they be regularly employed in this Institution so long as the suspension of Furman University continues. They think the interests of the Female College might be materially advanced, for the time, by placing Professor Furman at its head, and Professor Judson in charge of some one or more of its departments. This arrangement might secure an amount of patronage which would not only better sustain the original instructors, but afford some income to those thus temporarily engaged. We would, therefore, propose that the Professors of the University do what they can towards the procurement of an income, both from the primary school and the Female College, and that the balance of their salary be made good from the usual source.

Greenville Baptist Female College remains open during the war, persevering through tremendous financial challenges. In addition, by 1864 South Carolina Baptists are rethinking the purpose of women’s education. In the face of a massive loss of men in the South, Baptist leaders begin looking to women as the torchbearers of knowledge and culture. While never breaking out of their subservient role to men, the women of the Female College nonetheless come to play an important role in the preservation of southern life, beyond their individual families, in the post-war South.