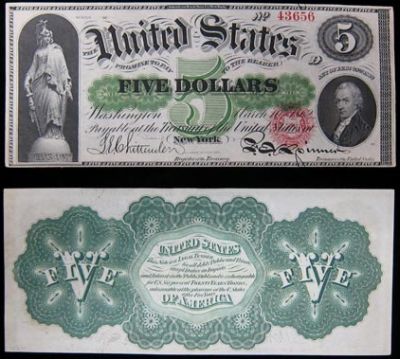 The United States is now battling against the Confederate States on several fronts. Financially, raising funding for the war effort is critical. Today, the U.S. issues the first national paper money. Denominations are $5, $10 and $20. The paper money becomes legal tender on March 17.

Meanwhile, President Abraham Lincoln continues to push for emancipation of African slaves. Today he meets with border state congressman to discuss his recent offer of financial compensation in return for the gradual emancipation of slaves in border states. Despite the offer of monetary reward, the border state congressman turn down the president’s offer, expressing fear of potential problems associated with a large free black population in the states.

In the Confederacy, white Baptists remain committed to the Southern cause, with many turning to spiritual means in an effort to win the war. Today marks the beginning of the army ministry of J. J. Hyman, Baptist chaplain of the Forty-Ninth Georgia Regiment.

In the coming years of war, Hyman emerges as one of the most visible Southern Baptist army chaplains.