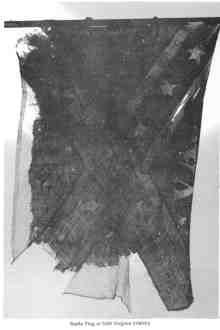 Amos Dickerson is a Primitive Baptist layman and small-time farmer of the New River District in Virginia, born in 1832. He has lived a hard-scrabble life. “His early opportunities were limited so that he grew to manhood with but little or no education, and with only muscle and brain with which to wage the battle of life.” In 1850 he marries Miss Mary Slusher, and the couple struggles to make ends meet.

At 29 years of age, the Floyd County native signs up for the Confederate Army, enlisting today in Richmond. Dickerson serves as a drummer in Company A, 54th Virginia Infantry. Regimental records reveal he is paid $72 on October 31, 1864, at a time when Confederate currency is almost worthless.

After the war, Dickerson returns home and transitions from layman to minister in his home church, the White Oak Grove Baptist Church. He also becomes active in the New River Primitive Baptist Association. “His services were soon in liberal demand both to the service of churches as pastor and to preach in places beyond. In at least three places the brush was cleared away, a rude stand was erected and he preached the gospel to the people, and baptized those who evidenced a work of faith, and for nearly forty years he served from three to five churches. His has been truly the work of a pastor. It required a travel on horseback a distance of 128 miles a month to serve the churches of his charge.”

Despite the financial and ministerial challenges he faces throughout the remainder of his life, Dickerson finds time to serve in the state legislature for six terms. He lives to a ripe old age,dying in 1920 in his home county.