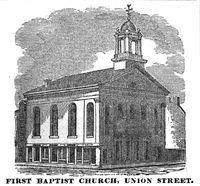 Amidst the desolation and death of war, moments of beauty remain. Today, Benjamin Johnson Lang (1837-1909) makes his debut as a conductor in Boston with the city’s first performance with orchestra of Mendelssohn’s Die erste Walpurgisnacht.

Lang is the organist of one of the most musically-talented Baptist congregations in America: the first Baptist Church of Boston. Founded in 1665, First Boston is one of the nation’s earliest and most prominent Baptist churches. During the Civil War, the “spirit of patriotism ran high in the congregation” and the ministry of the church continued despite “many distractions and discouragements.” The women of the church rose to the occasion, contributing “largely in aid of the sick and wounded soldiers, and were the steadfast helpers of the United States Sanitary Commission.”

In the midst of the troubling times, the music of First Baptist Boston on Sunday mornings provides at least a brief respite for worshipers.