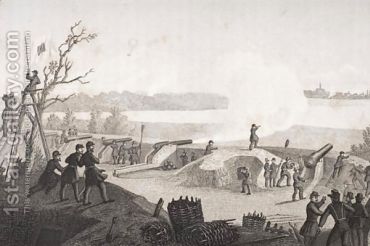 Siege of Yorktown by Francis Schell

For the past month, Union Maj. Gen. George B. McClellan’s Army of the Potomac, en route to the Confederate capital of Virginia, has besieged Yorktown, Virginia. McClellan’s drive to Richmond, known as the Peninsula campaign (having begun March 17), has not proceeded as planned. Caution on the part of McClellan, the logistics of moving a large army (121,500 men, 44 artillery batteries, 1,150 wagons, over 15,000 horses), and effective defensive maneuvers on the part of the Confederates have slowed progress considerably. In particular, the ever-lurking but elusive and deadly C.S.S. Virginia, the Confederate Navy’s ironclad warship, had led McClellan to abandon plans of sailing up the James or York rivers toward Richmond, and instead travel overland through marshy terrain. Arriving at Yorktown on April 4, the Union army had set siege to the riverside village.

For their part, Confederate defenders, under the direction of Maj. Gen. John B. Magruder, have successfully convinced McClellan that a large force is defending Yorktown, when in fact only 11,000-13,000 Confederate soldiers were present. By the end of April, Confederate reinforcements had arrived, but the Union still (unknowingly) had the advantage. When Magruder got wind of an offensive by McClellan, on the night of May 3 the Confederate Army quietly slipped away toward Williamsburg.

Today, the incredulous McClellan learns that the Confederates have abandoned Yorktown, leaving behind a deserted village. Union soldiers march into the empty town, greeted by one white woman and two blacks. The siege is over, but time has been wasted for naught, militarily-speaking.

And yet today’s occupation of the village of Yorktown is the latest chapter in one of the most notable, unfolding sagas of American history. With each occupation of a southern city or town, the emancipation of African slaves grows. While white Baptists fought on both sides of the Battle of Yorktown (or Siege of Yorktown), nearby African slaves, many of whom are Baptists, anxiously awaited the outcome. Following the Union victory, slaves begin streaming into town from the surrounding countryside. Many are Baptists.

Lt. Eugene A. Nash of the 44th New York regiment observed what followed:

“Colored people for miles around flocked to Yorktown as soon as (it was) occupied by our troops … The old and young, male and female, came in, bringing all their earthly possessions … They were extremely happy and hopeful … They sang, they danced, they prayed … The dawn of a new life had come. No person who witnessed that scene can forget it.”

Within a year, some 12,000 former African slaves live in freedmen communities in and around Yorktown. During the second half of the war, northern Baptists and Quaker missionaries minister to the earthly and spiritual needs of the former slaves in the same town where in 1781 George Washington’s revolutionary forces had defeated the British, under Lord Cornwallis, to end the American Revolution.

Freedom thus made two great strides forward in Yorktown, first in 1781, then in 1862. In the intervening years, Baptists went from a minority persecuted sect intent on securing religious liberty for all and largely anti-slavery in sentiment, to a majority status in much of the South, divided North and South over issues of slavery and freedom.