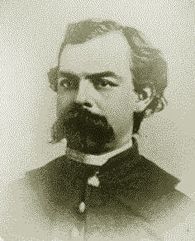 Not all German Baptist Brethren (Dunkers) are pacifists. First Lieutenant Edward Duchman Muhlenberg (1831-1883) of the 4th U.S. Artillery–Pennsylvania native, Yale graduate, civil engineer, and German Baptist–serves with Battery F in the First Battle of Winchester (Virginia) that unfolds late today and tomorrow. In the battle, Union forces led by Maj. General Nathaniel P. Banks are routed by Maj. General Thomas “Stonewall” Jackson’s advancing troops, who outnumber the enemy by more than double. Union casualties number over 2000, compared to some 400 Confederate casualties. Jackson’s victory gives hope to the South during a dark time for the Confederacy.

Muhlenberg survives the loss at Winchester and fights in many more battles during the course of the war, rising to the rank of adjutant general and quartermaster of the 4th U.S. Artillery on August 13, 1864. Remaining in the Army following the war, Muhlenberg resigns and returns to civilian life in 1869.

Traveling West, the German Baptist in 1871 is employed as the engineer for the Yellowstone Valley surveying expeditions of that year, excursions financed by the Northern Pacific Railroad one year prior to the creation of Yellowstone National Park in 1872, as the world’s first national park. The Northern Pacific Railroad, seeking to establish a transcontinental route, hires Muhlenberg to assist in surveying the area north of the Park from Bozeman to eastern Montana. Unfortunately, Muhlenberg is a bit too fond of alcohol, and, frequently drunk, does not perform his job satisfactorily.