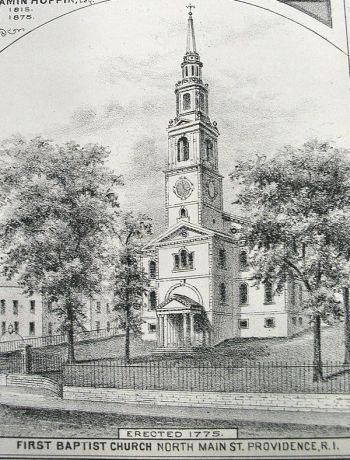 The American Baptist Missionary Union meets today at the First Baptist Church of Providence, Rhode Island, America’s first Baptist church. Among the reports and subjects discussed are the Union’s far-ranging mission work and funding issues. The war has created competition for churches’ financial resources. Dependent upon voluntary contributions from individuals and congregations, the Society searches for new ways to encourage churches to support their mission ministries around the world and in the states.

Despite the challenges at hand, the Union’s leadership offers an upbeat assessment.

By the care of a merciful Providence, the Missionary Union has survived the perils of another year,” and meets to celebrate its forty-eighth anniversary. Many years of trial it has seen, and many a time has been called to make mention of such deliverance as Zion’s King alone can send. Never before, it may be safely said, has its progress been opposed by so many obstacles as during the last year. Never have its Officers and Managers been so constantly shut up to faith in God. Never has help, arising from unexpected quarters and at opportune moments, been more strikingly manifested. And never had the members of this Union so much occasion devoutly to recognize the hand of a mighty and merciful Benefactor, and to pour out their hearts before Him in thanksgiving and praise. When we met in Brooklyn, a twelve-month ago, everything without and around wore an aspect portentous of evil to our people, our government, and our missionary operations. No man could tell what a day would bring forth, and all were shut up to hope and faith in Him who “alone doeth wondrous things.” Now all is changed. In a year, we have lived a generation, if we reckon time by the number and magnitude of the events it brings forth. To-day, we can say we have a people, a nation, a government and a missionary enterprise, not only to be sustained at great cost, but more abundantly blessed of God, in many respects, than ever before. What has been wanting in human appliances, has been more than supplied by the presence and power of a Divine energy and a Divine working. You may thank God and take courage. You may thank Him for placing you in a position where you might learn lessons never received in a day of material and outward prosperity.