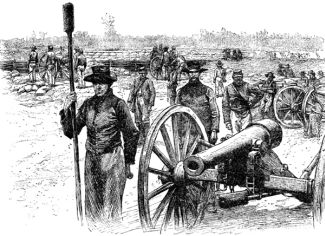 Anxiety permeates Richmond, the Confederate capital. Union General George B. McClellan, months into a slow, steady drive toward Richmond, lurks on the outskirts of the city, along the Chickahominy River, with his 105,000 strong Union Army. Between McClellan and the city limits are 60,000 Confederate troops commanded by General Joseph E. Johnston.

Going on the offensive, today Johnston attacks the Union army, which is divided by the river. Despite a series of miscues and a serious wound to Johnston later in the day, the Confederate general is successful in putting McClellan on the defensive. The battle continues into the next day, and when the sides finally disengage, both generals claim victory over what is essentially a draw: the Confederates yet stand between McClellan and Richmond, but the Union Army is still near the city. Yet ultimately the Confederates win in this Battle of Seven Pines, as McClellan, already weary from the long Peninsular Campaign, loses his will and the strategic initiative. In addition, the standoff and resulting passivity on the part of McClellan gives time for Confederate General Robert E. Lee to formulate plans for another attack on the Union Army at the end of June.

In the Battle of Seven Pines, 6,134 Confederate soldiers are killed, while 5,031 Union soldiers lose their lives. Many Baptists are numbered among the fallen, including Union soldier and Baptist layman George W. Miller of Browne Township, Michigan, born in 1843 in New York, and one of ten siblings. He dies sometime late in the day due to blood loss from a bullet wound.

One year prior to the war, the Miller family was one of the wealthiest in their township. Having moved to the Michigan frontier in the 1840s, Jared Miller, George’ father, had become a successful landowner and farmer. They were also committed Baptists. Jared had been one of the founding members of the First Baptist Church of Browne, established in 1854; the first meeting of the congregation had been held at the Miller’s home.

Young George took his Baptist faith seriously. He enlisted at age 17, marching off to war in May 1861 with the Third Michigan. In the army, George assured his parents that he was not involved in the swearing and other sins that were such an inherent part of army life. Private Miller received $15 per month, plus lodging, food and clothing in service of his country. George’s family supplemented his diet by mailing food stuffs from the family farm.

Yet today, following a year of service in the Union army, George’s life comes to a close, in a rather unsettling fashion. In the hours after the battle, he is listed as missing in action. His mother hopes for news of her son until her own death, but, as is true of some other soldiers during the war, his body is never identified.