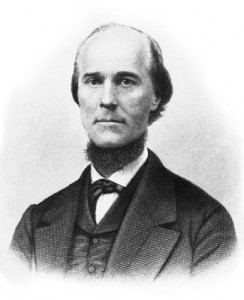 Joseph Brown, Governor of Georgia, and a Southern Baptist

Georgia Governor Joseph E. Brown, a Southern Baptist layman, has evidenced an independent streak since the beginning of the war. Brown governs over a state whose citizens, most of whom are not slave owners, barely supported secession in early 1861. In this second year of war, Brown has demonstrated that he will protect the interests of his state over against perceived unjust demands from Confederate officials. The Georgia governor is, in short, an avid proponent of state rights at a time when national rights are rapidly on the ascendancy in the Southern Confederacy.

In his duty of protecting his state, Gov. Brown is also willing to challenge the large slave owners to whom he owes his position, and whose influence ensured Georgia’s secession from the United States. A particular conflict between the governor and planters of the state has been simmering for some months, and today it spills over into the pages of the Atlanta-published Southern Confederacy newspaper.

Gov. Brown notifies the planters of Georgia that they have not responded to his late appeal to them to furnish negroes to work on the fortifications at Savannah–but few having been tendered. He reminds them that when Gen. [Hugh W.] Mercer [Confederate Commander of the District of Georgia] made impressments [Confederate government seizure of food, fuel, slaves, and other commodities to support armies in the field] some time ago, they complained loudly of it–objecting to the principle of impressment, and stating that they would furnish all the labor needed, if asked to do so.

Now they have been called on and have failed to respond. He notified them that Gen. Mercer now has the authority to make impressments, and will proceed to do so, with the consent of the Governor, and he doubts not of the Legislature also, if the needed labor is not furnished in ten days–say by the 14th of this month.

Savannah is an important city for both the Confederacy and Georgia. The state’s principle coastal city, and one of the largest citys in the Deep South, Savannah is in perpetual danger from the strong Union Army presence along South Carolina’s coast. Fortifying the city is an urgent task.

At the same time, the resistance of Georgia’s large slave owners to supporting the war with their arms, wealth, slaves and other resources remains a source of contention throughout the war. Plantation owners, by and large, are more concerned with maintaining their personal wealth. Gov. Joseph Brown’s willingness to challenge his state’s elites may, in part, stem from his membership in a church–Milledgeville’s First Baptist Church–in which wealthy slave owners, common white folk, and African slaves all worship under one roof.