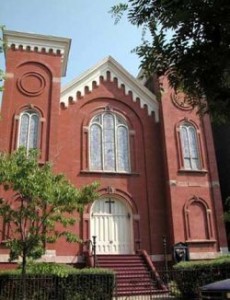 While many Northern Baptists are publicly abolitionist in sentiment, this does not mean that all Baptist abolitionists actually view blacks as equal to whites, as demonstrated by a lawsuit in New York over “negroes” sitting in certain pews.

This case has been before reported in the TIMES. The plaintiff sought to compel the conveyance of a pew in the church to him, and it was resisted on the ground that the plaintiff had caused a disturbance in the church by the introduction of negroes into the pew.

Judgment was now rendered for the defendants, the Court holding that the plaintiff had not established his right to have the conveyance made in the form demanded.

Also in today’s Times is a brief story about a new meeting house for the First Baptist Church at Greenpoint, Long Island. The church, located in a working-class district of New York, since the beginning of the war has grown quickly, necessitating larger facilities.

The corner-stone of the new meeting-house of the First Baptist Church at Greenpoint, L.I., has been laid with interesting services, in which the Pastor, Rev. W. REID, and Drs. WESTON and ANDERSON participated. This Church was organized in 1847. The first edifice, 22 by 40 feet, was erected in 1850, at a cost of about $1,000, the church being constituted with ten members. The present members number 132. The new house is 70 by 45 feet, of brick, and will cost about $12,000 with the lots, 70 by 45 feet. Toward this expense $7,000 have already been secured.

The Greenport church finishes construction of the new brick building near the end of the war, and the congregation later becomes known as the Union Baptist Church of Brooklyn.