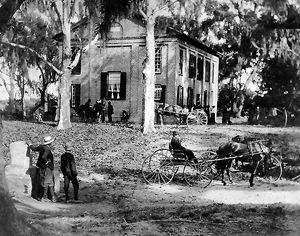 Northern missionaries, some Baptists, are operating the first school for former slaves on the Union-controlled South Carolina island of St. Helena. The school is part of the United States’ Port Royal experiment of educating and training freed slaves for autonomous living. Began on the Oak Plantation in June, the school quickly grows and this month moves to the Brick Baptist Church, the oldest church (built in 1855) on the island. Slaves built the then white-controlled church, and afterwards were restricted to the balcony during worship services. Now some of these very same slaves are obtaining an education on St. Helena Island.

Charlotte Forten, the first African-American teacher, teaches at Penn School until 1864. During the war, the Union Army, protecting the freed slaves, oversees the Brick Baptist Church, which is used by African Baptists. During this time, the church gives birth to three more African Baptist congregations on the island: Adam St. Baptist, First African Baptist and Ebenezer Baptist churches.