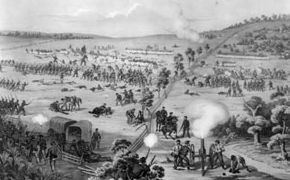 Confederate Gen. Robert E. Lee and his Army of Northern Virginia have been marching through Maryland for ten days, in the first invasion of the North by the South. Yesterday, however, an errant copy of Lee’s battle plans had fallen into Union hands. Union General George B. McClellan, previously too cautious to engage Lee, now seizes the initiative and suddenly makes his move against the Confederate general in the Battle of South Mountain, fought on a Sunday.

The two armies clash in the afternoon, and the sounds of canon fire are heard miles away during a worship service in a Pacifist German Baptist Church that will find itself in the middle of the action in a few days.

Baptists fight on both sides of the battlefield. Confederate Lt. Hugh W. Barclay of Company B, 23rd Georgia Infantry recounts the day from his perspective, including fighting alongside a Baptist minister.

We rested one day at Frederick and continued our march to Hagerstown where went into camp. This was Saturday the 13th of September 1862, and that evening the cavalry reported the enemy not far away.

Next morning, Sunday the 14th, we marched back a few miles to South Mountain, formed line of battle and waited the coming of McClellan’s advance. About 3 o’ clock in the evening the pickets began firing, the position of the 23rd Geo. Was about half way down the mountain to the left of the road, seven companies of which were behind a rock fence and the other three companies D.E. & B, exposed, my company B. one of them. The Yankees advanced in great force, and seemingly with much assurance. For a while we three companies made it as warm as possible for them, but soon we were shot out. In fifteen minutes with 32 men in my company, 23 were killed and wounded, five dead on the field. The other companies, D & E, suffered in about the same ratio. I have never been able to account for my escape. We were lying flat on the ground and upon our knees to shoot. Sergent Price by whose side I was lying, and who is now, if living, a Baptist preacher, in North Georgia, received several wounds, and a man on my right was shot in the forehead, fell dead across me. When my company was shot out, I got behind a big rock which was in line with the regiment behind the rock fence and there I found Lt. Steel of Company D. We were lying side by side looking at the blaze of fire from the men behind the rick fence and listening to the hurrahs of the Yankees who made charge after charge when an occasional bullet came up the line our way. Lt. Steel remarked, “They have flanked the regiment on their right and we will be captured”. I told him I thought not or hoped not, when just then I heard the dull thud of the bullet that hit him, and he said “I am killed”. He never moved, and the bullet that hit him, must have entered his heart. It must have gone over me or under me for I was nearest the direction from whence it came. This battle, much of it, was at night, as late as 9 o’ clock it must have lasted. The regiment behind the rock fence were about out of ammunition, and fortunately about this time the Yankees ceased firing. Our troops away to the right were giving away and word was passed up the line to quietly slip away which the men did, and the regiment escaped capture. The loss here to the regiment was confined principally to the three companies. Away to our right we suffered considerably, losing many men and officers, and among the latter, my brother, E.S. Barclay, Lt. Col. Phillips, Geo. Legion who was seriously wounded, and though he lived a year or so thereafter, never recovered. The enemy, some of our men said who were wounded and captured said the Yankees loss in front of the rock wall was about 300 killed, including the Federal General Reneau(Reno). Gen. Hill rode up to Gen. Colquitt during the fight and asked what regiment that was down there and said they would be captured.

Brother William was proud of the conduct of his regiment that night. In his report of that battle, General Hill called Brother the hero of South Mountain. This battle was made necessary to the assembling of the army for the great battle of Sharpsburg which followed the next Tuesday and Wednesday. All that Sunday night we marched, passing through the village of Sharpsburg and went into camps on the banks of the Potomac. After the close calls I had in this battle, it would seem I never should have been scared thereafter. . .

McClellan’s surprise offensive finally puts the invading Lee on the defensive, forcing the Confederate general to regroup and alter his plans. Three days hence, the defining battle of Lee’s invasion will take place. Little does anyone know this day that the Confederacy has reached a high water mark in terms of invading enemy territory.