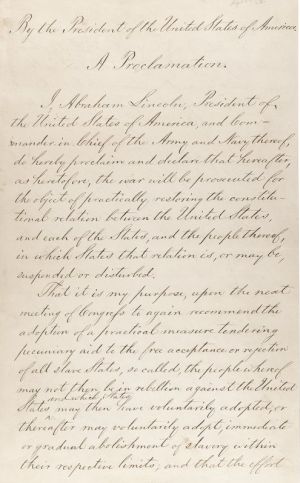 The recent victory at the Battle of Antietam provides United States President Abraham Lincoln the political capital to make public what he has long known he must do (and what the South has long warned that the “black president” will do): begin the formal emancipation of African slaves.

Today Lincoln takes the first political step toward freeing all African slaves by issuing the Preliminary Emancipation Proclamation, with emancipation to be effective as of January 1, 1863. Many Baptists in the North celebrate as the news spreads, and in the weeks and months ahead pass resolutions of support for Lincoln’s decision. At the same time, white Baptists of the South are spurred to a fresh round of denunciations of Lincoln as an ungodly tyrant. Enslaved African Baptists who learn of the announcement, on the other hand, quietly celebrate a newfound hope of freedom.

By the President of the United States of America

I, Abraham Lincoln, President of the United States of America, and Commander-in-Chief of the Army and Navy thereof, do hereby proclaim and declare that hereafter, as heretofore, the war will be prosecuted for the object of practically restoring the constitutional relation between the United States, and each of the States, and the people thereof, in which States that relation is, or may be, suspended or disturbed.

That it is my purpose, upon the next meeting of Congress to again recommend the adoption of a practical measure tendering pecuniary aid to the free acceptance or rejection of all slave States, so called, the people whereof may not then be in rebellion against the United States and which States may then have voluntarily adopted, or thereafter may voluntarily adopt, immediate or gradual abolishment of slavery within their respective limits; and that the effort to colonize persons of African descent, with their consent, upon this continent, or elsewhere, with the previously obtained consent of the Governments existing there, will be continued.

That on the first day of January in the year of our Lord, one thousand eight hundred and sixty-three, all persons held as slaves within any State, or designated part of a State, the people whereof shall then be in rebellion against the United States shall be then, thenceforward, and forever free; and the executive government of the United States, including the military and naval authority thereof, will recognize and maintain the freedom of such persons, and will do no act or acts to repress such persons, or any of them, in any efforts they may make for their actual freedom.

That attention is hereby called to an Act of Congress entitled “An Act to make an additional Article of War” approved March 13, 1862, and which act is in the words and figure following:

“Be it enacted by the Senate and House of Representatives of the United States of America in Congress assembled, That hereafter the following shall be promulgated as an additional article of war for the government of the army of the United States, and shall be obeyed and observed as such:

“Article-All officers or persons in the military or naval service of the United States are prohibited from employing any of the forces under their respective commands for the purpose of returning fugitives from service or labor, who may have escaped from any persons to whom such service or labor is claimed to be due, and any officer who shall be found guilty by a court martial of violating this article shall be dismissed from the service.

“Sec.2. And be it further enacted, That this act shall take effect from and after its passage.”

Also to the ninth and tenth sections of an act entitled “An Act to suppress Insurrection, to punish Treason and Rebellion, to seize and confiscate property of rebels, and for other purposes,” approved July 17, 1862, and which sections are in the words and figures following:

“Sec.10. And be it further enacted, That no slave escaping into any State, Territory, or the District of Columbia, from any other State, shall be delivered up, or in any way impeded or hindered of his liberty, except for crime, or some offence against the laws, unless the person claiming said fugitive shall first make oath that the person to whom the labor or service of such fugitive is alleged to be due is his lawful owner, and has not borne arms against the United States in the present rebellion, nor in any way given aid and comfort thereto; and no person engaged in the military or naval service of the United States shall, under any pretence whatever, assume to decide on the validity of the claim of any person to the service or labor of any other person, or surrender up any such person to the claimant, on pain of being dismissed from the service.”

And I do hereby enjoin upon and order all persons engaged in the military and naval service of the United States to observe, obey, and enforce, within their respective spheres of service, the act, and sections above recited.

In witness whereof, I have hereunto set my hand, and caused the seal of the United States to be affixed.

Done at the City of Washington this twenty-second day of September, in the year of our Lord, one thousand, eight hundred and sixty-two, and of the Independence of the United States the eighty seventh.

[Signed:] Abraham Lincoln
By the President