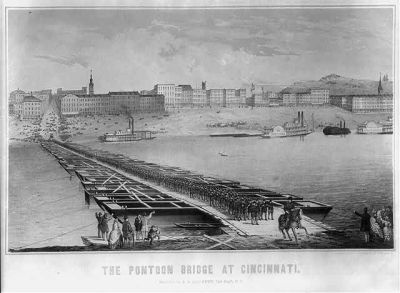 This month has been tension-filled in the Northern city of Cincinnati, Ohio. For weeks, the Confederate Army has lurked nearby in northern Kentucky, poking and prodding for a way to effectively attack the Queen City located across the Ohio River. Today, the latest Confederate offensive in the vicinity of Cincinnati takes place about 15 miles southward near Richwood, Kentucky, in the proximity of Covington, Kentucky.

Searching for approaches to Cincinnati, Conf. General Basil W. Duke leads a force of some 500 Confederate soldiers in an attack against a federal camp commanded by Brig. Gen. Quincy A. Gillmore.Gillmore’s report of the attack notes:

I have to report an attack on my lines this morning at 11 o’clock by over 500 rebel cavalry, with one field piece. They made a sudden dash on the pickets from the direction of California, capturing several small posts. Fifty men are missing, but I am in hopes that some of them will make their appearance. They disappeared (as suddenly as they came up) toward Crittenden. I learned their number from parties who met them on the Crittenden road. It is doubtless the identical party that I have heard of before, numbering 508. I am gratified that more cavalry are coming, and I wish they were here now. It is next to impossible to resist these sudden dashes with infantry, and my pickets will be in constant danger of being driven in unless I have enough mounted force to scour the country for miles around.

Despite this modestly successful Confederate attack upon Union forces nearby, Cincinnati can now breath a sigh of relief, as the city is guarded by Union soldiers manning newly built fortifications and freshly dug trenches in the hills of northern Kentucky outside of Cincinnati. For these defensive bulwarks, Cincinnati is indebted to what has become known as the Black Brigade.

On September 3, one day after the nearby Confederate presence led to a declaration of marshal law in Cincinnati, the city’s free African American population had quickly been rounded up and forcefully pressed into service in defense of the city. Marched across the river into northern Kentucky, the black citizens were initially forced to do menial tasks in support of Union forces. Within days, however, Union Gen. Lew Wallace stopped the abuse of Cincinnati’s black citizens and appointed Colonel Judge William Dickson as their commander. Dickson promptly bestowed the name “Black Brigade of Cincinnati” upon the African American unit and declared that they “should be kept together as a distinct body… that they should receive protection and the same treatment as white men… and that their sense of duty and honor would cause them to obey all orders given, and thus prevent the necessity of any compulsion…”

Promising to treat the African American men with respect, Dickson sent them back to the city to visit their families, asking them to report back the next day. The 400 men returned to their families for the night, and the following day 700 men reported for duty. The now-700 strong Black Brigade was put to work building defenses around Cincinnati, completing their task on September 20.

Upon returning to the city, the Black Brigade was greeted by cheering crowds, both black and white. Colonel Dickson praised their service:

“You have labored faithfully; you have made miles of military roads, miles of rifle pits, felled hundreds of acres of the largest and loftiest forest trees, built magazines and forts. The hills across yonder river will be a perpetual monument of your labors… Go to your homes with the consciousness of having performed your duty – of deserving, if you do not receive, the protection of the law, and bearing with you the gratitude and respect of all honorable men.”

The fortifications and trenches built by the Black Brigade of Cincinnati thus led to today’s skirmish, in which Confederate forces, frustrated by the city’s defenses (as had been previous Confederate attempts in recent days), are only able to achieve modest success in a minor skirmish miles away from Cincinnati. The Union city remains safe for the remainder of the war.

The story of the Black Brigade of Cincinnati, however, does not end this week.

Several members of the Black Brigade of Cincinnati went on to serve in the newly formed United States Colored Troops regiments, including Powhatan Beaty, who became a 1st Sergeant in the 5th UCST and earned the Congressional Medal of Honor. Many who served also had successful careers following the war, including Peter Fossett, a former slave, who was the pastor at the First Baptist Church in the Cincinnati neighborhood of Cumminsville for 34 years; and Dangerfield Early, who served as the pastor of the Walnut Hills Baptist Church, and who founded a school for African American children that would become the Douglas[s] School.

The Douglass School, founded by Dangerfield Early in Cincinnati’s Walnut Hills neighborhood in 1858, became a leading school for African American children, and was renamed after Frederick Douglass in 1902. It yet remains today, operating as a Montessori school.

For the remainder of the war following the saving of Cincinnati from Confederate threats in September 1862, Black Union soldiers, steadily increasing in numbers, serve pivotal roles in the ultimately successful victory of the United States over the Confederate States of America.

In September 2012, the city of Cincinnati dedicated a long-deserved monument to the Black Brigade of Cincinnati.