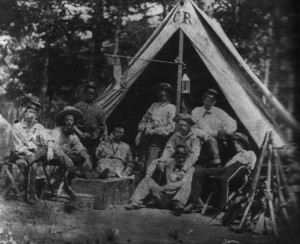 Baptist leaders and churches of the Confederacy express little to no remorse over church members killing their Northern brethren in the fight to maintain African slavery. Nor do most doubt that slavery is the lot of the black race.

Personal immorality of church members serving in the Confederate Army, however, is another matter altogether.

The Mount Pisgah Baptist Church of North Carolina illustrates this dichotomy, as noted in the simply-stated congregational minutes of its April business meeting.

April, 1863 – Absentee committee reported. Charge against Harmon Sears for absenting himself from the church stating that he was guilty of playing cards and other irreligious practices from which he was unwilling to part. M.J. Ferrell and on motion his name was dropped from the church roll according to the above report. Brother C.F. Dowd asked for leave of funeral absence on motion it was granted. Brother Irah Beckwith asked for the same which was also granted. On motion the church agreed to offer up their petitions to almighty God in behalf of the members of this church who are in the army. P.W. Dowd, moderator. C.R. Scott, clerk.