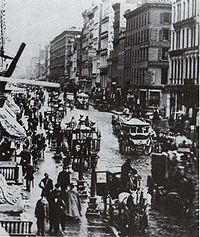 This week Rev. I. S. Kalloch of New York City’s Laight-Street Baptist Church preaches a patriotic sermon. Rallying his congregation to the abolitionist cause, he condemns the slaveholding South, as summarized by a correspondent of the New York Times.

At the Laight-street Baptist Church. Rev. I.S. KALLOCH introduced the devotional exercises of the congregation by reading selections of Scripture appropriate to the day: It is always proper to pray; but it is essential now. God will be inquired of by us. It is very appropriate that such a day as this should be set apart, and given to our country. Let us devote it well and wisely. Let us look over the ground and see where we stand. Let us first, try to appreciate more thoroughly the importance of the contest. Everything is involved in it. It is a contest between two civilizations, or rather between civilization and barbarism; and its issue bears upon the fate not only of slaves, but of freemen; not only of black men, but of white men: not only of America, but the would. The point in dispute is not one of political platforms, or the policy of an Administration — it is a simple question of civil life or death. Whether we are to continue a free people, or go down beneath the wave, and become the butt and jeer of all the dynasties of the world; whether we are to be a lighthouse on the shore, or a buoy on the waters; all this is involved. The consolidation of a Southern Empire with Slavery as its chief corner-stone — with fillibustering, privateering and border strifes — would be a surrender of all that has been won in the past — would be a relapse into a condition much worse than that from which our fathers emerged through seas of blood. Can any one doubt the disastrous effects of Southern supremacy? The South is the type and asserter of Oriental Absolutism — the defender of the divine right of tyrants. We are fighting in the noblest cuuse in which weapons can be wielded, or armor girded on, or treasure lavished, or willing blood poured out like water. But we should not only appreciate the importance of the contest.

Second — We must have confidence in the administration of it. We are a curious people. We talk a man up to the skies to-day and thrust him down to hell to-morrow. To-day Gen. MCCLELLAN is a god -to-morrow he is a fool. The truth is, he is neither. There has been fault found enough to sink a dozen Cabinets in a weaker Government. It is true that rulers and commanders must expect to be closely washed. Much has been given to them, much with [???] required [???] [???]. The country has given them [???] the money they asked fo[???] and the power of procuring all the men they need. But they need more [???] [???]. They need our confidence. Men work with [???] [???] when they work without encouragement. They [???] fight with fettered hands and [???] energies, when they find themselves surrounded not only with bitter enemies, but with grumbling friends — strict to mark every slip, severe to punish every error, ready to hoot over every failure, receiving the worst rumors with the readiest ear, blaming everything they see done, and believing nothing is being done unless they see it. The people that wishes to be well governed and nobly led, must be just and generous — must be as zealous to reward as it is vigilant to exact full and righteous service. It is impossible but that offences will come, mistakes be made; but our leaders see more and know better than we do; they are at least men of average intelligence, they are our appointed authority, and it is the divine command, as well as our highest interest, to respect them, confide in them, pray for them. Third — We should learn to be patient under defeat. We must wade through deep seas in this National Baptism; we must lose brave officers and heroic men; we shall encounter temporary reverses and disasters. We must learn patience. It took seven years to right the Revolutionary war. Our fathers fought themselves poor, fought themselves barefooted, and yet never grumbled half so much as we, who, if it were not for the lying newspapers, would hardly know we are in a war! We need faith, that if defeat follows defeat, and misfortune succeeds misfortune, it is only to try us, to discipline us, to prepare us for greatness. We are too easily discouraged. Bull Run scared us almost to death. It is the duty of the hour to anticipate a long struggle and prepare for it. Energy is enervated by flattering pictures of speedy victories. There is danger of collapse if these pictures prove to be “castles in the air.” We want the negro’s idea of perseverance,. “Catch hold, hold on, and never let go.”

Finally, we should learn to pray more. We do not pray enough. Our fathers were driven to the sanctuary and the Bible; now men desert the sanctuary and read the papers. God will be acknowledged in the earth. The nations that will not serve Him shall perish. Let us look to Him and pray for our President, that he may be sustained under his tremendous burdens; for our Generals, that they may be kept from the steel of the assassin and from death in stricken battle; for our soldiers, that their heads may be covered in the day of battle, and for the poor slave, that God in His Providence may so make the wrath of man to praise Him, that every yoke of oppression may be broken, and not a slave be left to clank his chains in all our borders!