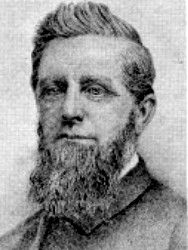 Today Lieutenant James Hill (1822-1899) of Company I of the 21st Iowa Infantry, having previously served as an unofficial spiritual counselor to his soldiers, is unanimously elected regimental chaplain. But Hill, a Baptist minister, does not give up his arms. Instead, he continues to lead his troops in battle and becomes known as the “fighting chaplain.”

Hill’s valor is well known within the Iowa unit. Less than two months ago, on May 16 at the Battle of Champion Hill (Mississippi), the Lieutenant had single-handedly captured three enemy pickets by his quick thinking and ingenuity.

Hill survives the war and returns to his home of Cascade, Iowa, where he pastors the local Baptist church.

On May 15, 1893, an aged Lieutenant James Hill is officially recognized by U. S. President Grover Cleveland for his heroic act at the Battle of Champion Hill.

The President of the United States of America, in the name of Congress, takes pleasure in presenting the Medal of Honor to First Lieutenant (Chaplain) James Hill, United States Army, for extraordinary heroism on 16 May 1863, while serving with Company I, 21st Iowa Infantry, in action at Champion Hill (Baker’s Creek), Mississippi. By skillful and brave management First Lieutenant Hill captured three of the enemy’s pickets.