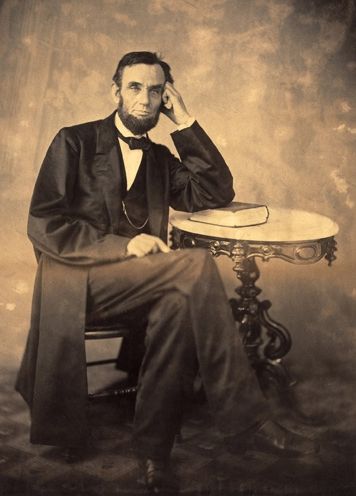 Today, Sunday, U.S. President Abraham Lincoln visits the studio of photographer Alexander Gardner and poses for a new portrait. The president sits for a number of portraits, and later selects as his favorite a picture of him sitting next to a small table with his head leaning upon his left hand (pictured).

According to eyewitnesses, Lincoln is in good spirits today. The recent Union victories at Gettysburg and Vicksburg have dealt a severe blow to the rebellious Southern states, and hence to the institution of African slavery that the president has long opposed. Lincoln as a young boy listened to abolitionist sentiments in the Baptist church of his youth, and today a declaration from over 3700 English and French Protestant clergy, expressing support of the war against slavery, is read in the First Baptist Church of Providence, Rhode Island, the nation’s first Baptist church. An eyewitness recounts that “the spacious church was filled to overflowing.”

The two men are in the midst of traveling throughout the United States, meeting with ministers and politicians and reading the declaration at each stop along the way. In many instances, including at Providence, local ministers compose a formal reply of appreciation to the British and French clergy.

Although many Southern whites remain fully committed to defending African slavery and white supremacy as God’s will for the two races, freedom for African slaves in the Confederacy is well under way seven months after the issuing of the Emancipation Proclamation.