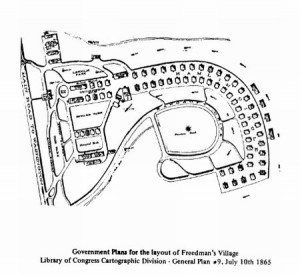 U.S. President Abraham Lincoln‘s April 16, 1862 emancipation of slaves in the District of Columbia set in motion a chain of events that result in this month’s establishing of a black church for freed persons on the grounds of the former plantation of Robert E. and Mary Lee, a congregation from which two black Baptist churches emerge.

Emancipation in D.C. not only provided freedom for the city’s black residents, it also made the nation’s capital a safe haven for Union Army-emancipated and escaped (fugitive) slaves, or “contrabands” of war. Within months, former slaves from Virgina and Maryland were flocking to the District for protection. Some estimates indicate that more freed persons were living in D.C. in 1863 than anywhere else at the time.

The government responded by setting up “contraband camps” in the city, yet the camps quickly became overcrowded and disease-ridden. So bad were camp conditions that in June 1863 a location outside the city and across the Potomac River was selected for a “Freedman’s Village,” a place with much room and surrounded by farmland.

The location? Arlington Estates, the former plantation of Confederate General Robert E. Lee and his wife, Mary Custis Lee, the latter of whom had inherited the estate from her parents.

Initially, Freedman’s Village was intended as a temporary haven for freed slaves, a place where they could receive clothing, shelter, food, and medical care, in addition to receiving a rudimentary education and training in employment skills.

The ensuing months, however, have turned Freedman’s Village into a quasi-permanent mini-city for the village’s former slaves, most of whom have no other immediate prospects of housing or livable employment. Bowing to reality, the government today dedicates Freedman’s Village as a permanent town with homes, schools and businesses. The dedication comes in the form of a religious ceremony.

Religion, a focal point of the African slave and freedman experience, has been and remains the center of community life in Freedman’s Village. Within days of the dedication ceremony, the American Tract Society erects a non-denominational chapel on village grounds, providing church services for residents.

Among village residents, Baptists are most represented, reflecting the predominance of the Baptist faith among the black population of the South prior to and during the war. Upon the conclusion of the war, Baptists withdraw from the chapel and form their own congregation, which becomes known as the “Old Bell Church.” In September 1866 the Baptist congregation moves to a new location and constructs a new building, adopting the name Mount Zion Baptist Church.

In 1873, a second Baptist church in Freedmen’s Village opens when 85 members of the Old Bell Church / Mount Zion Baptist Church form a new congregation. Initially taking the name of Antioch Baptist Church, the change to Mount Olive Baptist takes place the following year at the suggestion of the wife of pastor Washington Waller.

When Freedman’s Village is finally demolished in 1900, the two Baptist churches are well-established and prospering. Both congregations remain to the present, serving the spiritual needs of Arlington’s African American population.