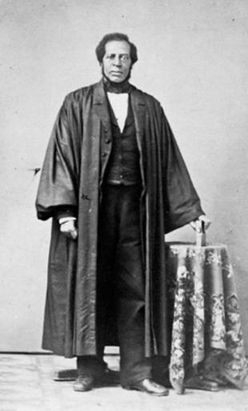 As the one year anniversary of U.S. President Abraham Lincoln‘s Emancipation Proclamation nears, a contraband (freedman’s) camp in Union-controlled Yorktown, Virginia continues to grow. This month the recently-formed 4th and 6th U.S. Colored Infantry Regiment arrives, to the surprise of many new freedman who were not even aware that colored regiments were forming. Some excited freedman dance in the streets at the sight of the black soldiers.

Religion is a big part of the black experience in the camp. The Quakers, early abolitionists in America, have a camp store and are providing the seeds, tool and knowledge to assist former slaves in the growing of their own gardens.

The Baptist faith, however, is the predominant religious expression among freedman. For many freedman, the nearby Rising Sun Baptist Church in Lackey is an introduction to public worship unrestrained and uncensored by white dominance or influence.

In addition, the nearby Shiloh Baptist Church of Slabtown is formed this month and becomes the spiritual home of many freedman. Baptist pastor Rev. Jeremiah W. Asher (1812-1865), a noted black abolitionist pastor from Philadelphia who is a newly-enrolled soldier in the 6th U.S. Colored regiment, assists former slave John Carey in the formation of the Shiloh congregation. The church is named after Asher’s Philadelphia church of the same name.

Asher had grown up as a free black in Connecticut, the grandson of Gad, an African native who at the age of four had been stolen from the coast of Guinea and shipped to captivity in America. Purchased by a ship carpenter named Titus Bishop in Connecticut, Gad was treated relatively well as a slave. After some forty years of bondage he was offered his freedom if he would fight in the American Revolution. Gad seized the opportunity, fighting in numerous battles. Yet Bishop broke his promise to Gad, forcing the slave to purchase his freedom, which he did. In addition, the U.S. government paid Gad a pension of $96 annually for the remainder of his life for fighting in the army.

And so it was that Asher grew up as a third-generation free black, one of few blacks in North Branford to receive a formal education as a child.

Following his marriage to Abigal Steward in 1833, Asher became interested in religion and began attending Baptist meetings in nearby North Haven, eventually joining the First Baptist Church. The pastor, Rev. Gustavus F. Davis, took Asher under his wing, and in time Asher felt called to preach. After attending a pastor’s institute, the aspiring preacher was licensed by the First Baptist Church of Hartford in 1839.

In 1840, Asher and ten other black members of First Baptist Hartford, unhappy at being confined to the “Negro pew,” sought and were granted dismissal from the congregation in order to start their own black congregation “where they could worship with greater liberty, and enjoy equal religious privileges which coloured people, belonging to white congregations, are in most instances deprived of.” Shortly afterward, the Ashers moved to Providence, Rhode Island, where Jeremiah became the pastor of the Regular (Calvinist) Baptist remnant of the African Union Meeting and School.

That remnant (7 people) was recognized as the Meeting Street Baptist Church in December 1840.  In March 1842 the First Baptist Church of Providence raised funds to pay Asher’s salary.

For nine years Asher pastored the Providence congregation. In time he became well known in black Baptist circles in the North, receiving invitations to pastor a number or black congregations. He finally accepted one of the calls, that of the Shiloh Baptist Church of Philadelphia.

Although a prominent black congregation, the Shiloh Church was in debt and desperately needed the leadership of an experienced minister like Asher. Within months of arriving in Philadelphia in 1849, Asher sailed to England to raise money to pay off the church’s debt and expand the congregation’s facilities. Touring English Baptist congregations and advocating for abolitionism in America, Asher was successful in his fund-raising mission and in raising his stature back home. The success of his sojourn in England was such that in 1850 he wrote his memoirs, a volume that was published in London.

During the next decade Asher and the Shiloh Baptist Church advocated for abolitionism as Asher became a prominent Baptist minister in the city of Philadelphia. On December 2, 1859 some 400 persons gathered in the Shiloh meeting house to pray for John Brown at the time of his scheduled execution.

Asher’s Philadelphia congregation resolved “that our brother carries with him the prayers and sympathies of this church, that his life and health may be preserved, and labors abundantly blessed of the Lord while absent from us.”

Jeremiah Asher, however, does not make it back home alive. Contacting typhoid fever in 1865 at the close of the war while ministering among sick soldiers at the regimental hospital in Wilmington, North Carolina, Asher dies on July 27, survived by his wife Abigal and his sons Thomas (eighteen years of age) and John (ten years of age).

Friends from the 6th Colored Infantry purchase a beautiful case and casket for Asher’s body, and one accompanies the casket to Philadelphia, where on August 8 some thirty ministers gather for the funeral at Shiloh Baptist Church.

“A procession walked to the church, which was soon crowded in every part, including the galleries. The pulpit was draped in mourning, and the United States covered the coffin,” according to one account.

The Young Men’s Christian Association, present at Asher’s funeral, offered a resolution: “That the members of this Association deplore with inexpressible sorrow and anguish this, our Church’s greatest calamity,–and that while we bow in submission to the decree of an all-wise Providence, we pray that peace and unity may reign throughout the land; then will the object be attained for which our illustrious pastor has died.”

Philadelphia’s Shiloh Baptist Church is still active to the present. Having reached a peak of 3,000 members in the 20th century, the congregation is now comprised of about two hundred members.

The Shiloh Baptist Church of Slabtown, Virginia also yet exists as an active congregation. The original church building and the entirety of the remains of Slabtown were purchased by the National Park Service in the 1970s. The church is now located next to the Yorktown Battlefield.