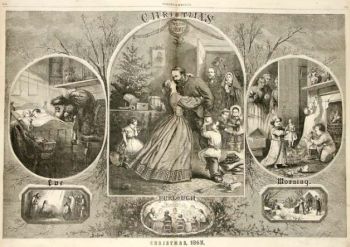 One year after Thomas Nast’s first illustration of Santa Claus appears in Harpers Weekly, Christmas, a day that is not yet universally celebrated in America, is haltingly acknowledged throughout the North and South.

In Washington, D.C., U.S. President Abraham Lincoln works today as usual, believing that taxpayers expect such of him. Lincoln’s activities today include holding a cabinet meeting, correspondence, and a discussion of the constitutionality of the draft with John Hay, his private secretary. He also assures the Massachusetts Anti-Slavery Society that he remains committed to his Emancipation Proclamation. Not least of all, the president muses about the ramifications of his recent Amnesty and Reconstruction Proclamation, hoping that it will be successful in breaking up Southern loyalty to the Confederacy.

Meanwhile, Lincoln’s youngest son, Tad, has books and clothing sent to wounded Union soldiers in nearby hospitals. The packages are signed “From Tad Lincoln.”

Within faith communities, Roman Catholics have long celebrated Christmas as the time of the birth of Christ. Most Protestants, however, place muted emphasis on the religious aspect of the holiday. Baptist churches, believing the holiday to be pagan and popish in origins, do not celebrate Christmas and will not until the 1870s or perhaps 1880s, following the debut of Christmas as a national holiday in 1870.

For Baptists of Mattoon, Illinois, the day is one of new beginnings. Christmas is not observed, but a church is born. The minutes of the first meeting of this Baptist body are all business, although great joy hides behind the formal language:

“At a meeting of the Baptists of this place for the purpose of organizing an independent Church of Christ, the Rev. Jas. Frazer was called to the chair. Bro. H. J. Treat, Secy., Rev. J. W. Riley read the names of the members which were enrolled…..The Articles of Faith were read…The Church Covenant was then read and unanimously adopted. Moved that this company of brethren and sisters invite ministers, deacons and members of other churches to consider the propriety of recognizing us as an independent church of Christ. Moved that on Saturday, January 30th, 1864 be the day set for that purpose…”

While Baptist churches do not observe Christmas as a holiday or holy day, many Baptist families observe the day at their homes, as do many Northern and Southern families at large. Difficult times in the Confederacy means that Southern family celebrations are often muted.

There is, to be sure, little to celebrate in the Confederacy. The residents of Charleston, South Carolina, awash in Baptists, awaken to the regular morning shelling from the Union battery on Morris Island. The shelling ignites a fire at the intersection of Broad and Church streets; one building is destroyed.

An editorial in the Charleston Courier captures the feelings of the day among the city’s white citizens:

The Christmas of 1863 brings no gifts for the boys and girls. The sounds of battle have frightened away from our bleeding Southern land the bearer of painted toys, the candies and plums, and their parents and elders will have to be content with wholesome food of simple quality, seeing that hams and turkeys, mince pies and plum puddings are things the contest we are engaged in compels them to do without.

From the South Carolina city of Columbia the Confederate Baptist newspaper captures the mood of the home front times in the white Deep South at large, while also reminding readers, in a rather vague manner, that there is a religious element to the holiday:

This season of festivity comes to us clad in sable vestments. A year has made sad havoc in our domestic circles; and many of the young and hopeful, whose genial presence graced the festive board of the last year, have fallen on the field of battle, and rest in their honored graves. Christmas can never be to us the gladsome season that it once was. The dark pall of war has fallen over it. But whilst tears flow over the loved and lost, we are reminded of the consoling fact, that this season commemorates the advent of Him who “brought life and immortality to light,” and thus provided the means of access to that blessed state, where the dissevered links of earthly love shall be reunited, and the bereaved pilgrims of time shall be blessed with a permanent and blissful meeting….

Gloominess aside, some celebrations do take place in the camps of Confederate and Union soldiers. In many instances, a special meal is prepared and games are played. Depending on the availability of supples, some camp observances are more elaborate than others. Within the Confederate Army, celebrations are often on the lesser side, as in many instances rations are in shorter supply.

The Confederate Baptist offers words of comforts this Christmas day to Confederate soldiers in particular, words that speak to the nature of Christmas as a family celebration and that do not reference any religious aspects of the day:

Soldier, in your distant camp, we wish you a merry Christmas. Separated as you are from those you love, your thoughts revert to home, with its serene and blessed enjoyments. We wish you were there. We wish you could see your wife and little ones, and spend this genial season with them. But the call of your dear country, and your sense of duty, detain you in camp. Your present position is the post of honor. It is, also, one of mercy to your countrymen. Your strong arms and brave hearts keep back our advancing foes, and preserve our homes from insult and desolation. We will remember you, at our quiet homes; and, as we sit beside the hearths made secure by your valor, we shall life up our earnest entreaty to God to bless and preserve you. A thousand voices blend with ours, in cordial greeting to you, in your distant camp, and in earnest supplication for you, at the throne of the heavenly mercy. May you be contented and happy; and may Heaven’s richest blessings rest upon you.

In Florida, Richard Furman’s granddaughter comments briefly on the day: “Another Christmas day finds us all spared. We are having sickness among the negroes …” Sickness or willful refusal to participate in white celebrations? Masters are typically blind to the true feelings of their chattel.

In some instances, enemies seek peace for a day. In Union-occupied Culpeper, Virginia home front citizens from different sides of the war set aside some of their animosities as Union soldiers provide destitute local Southern families with food and presents for children.

Across the United States, a new poem by Henry Wadsworth Longfellow captures the feelings of many.

From Longellow’s poem later comes the Christmas hymn, “I Heard the Bells on Christmas Day.”

During this first Christmas Day since the Emancipation Proclamation, many former slaves observe their first Christmas as free persons. Celebrating freedom, feeling good-will and ever more hopeful of peace, this day is especially joyous.

In San Francisco, California, black Methodists and Baptists hold a joint December festival. Proceeds are “for the benefit of” the Mount Olive Baptist Church.

In the Union camps, soldiers of the 9th Louisiana Regiment (African Descent), later known as the 63rd U.S. Colored Regiment, celebrate their first Christmas day in freedom. One soldier offers a speech:

” Fellow Soldiers of the Sebenth Regiment: I is mighty glad to enjoy dis portunity for enjoying dis fust free Christmas in dis world what we live in. A year ago, where was we? We was down in de dark land of slavery. And now where are we? We are free men, and soldiers of the United States. And what have we to do? We have to fight de rebels so dat we never more be slaves. When de day of battle come what will we do? I speak for me, and I say for myself, I go and fight de rebels till de last man die. Yes, under de flags what was presented to us from New York, we fight till de last man die; and if I be de last man, what will I do ? I hold up de flags, and if I die, den I go to my grave consified for doing my duty. De President of de United States is one great man what has done more good dan any oder man what ever was borned. I bless de Lord we fight for so good Commander. I have no more to say now and evermore -Amen.”

The prayers were fervent and powerful, and when an allusion would be made to the soldiers who had come from their distant homes, in the North country, to help and save de poor slave, and, like Jesus, bring dem good tidings of great joy, a shout went up that sent its notes on the still night air to the distant pickets in the surrounding pines. When asked, as they could not read, how they could quote the Scriptures, they replied: We have ears, massa, and when de preacher give out his texts, den we remembers and says dem over and over till we never forgets dem; dat is de way, massa, we poor people learns de Word of God.

” The next exercise consisted of speaking and singing, at intervals. While one was speaking, another would take a blazing pine torch from the fire, and hold it up, so that all might see the speaker. At two o clock, a recess was had, and all were invited to partake of coffee, which luxury they can now purchase without any difficulty, as they have plenty of money, obtained of the soldiers for vegetables and poultry.

” After this came what they called the shouting exercise. It was introduced by the beating of time by three or four, with the feet. Soon the whole company formed into a circle, and commenced jumping and singing to the time and tune of

This was continued until the most fertile imagination was exhausted, embracing an invitation to sisters, soldiers, preachers, &c., to meet them on Canaan s happy shore.

” Never did these poor slaves celebrate a Christmas Eve under such circumstances before. What ever may be their future, they are now, ‘to all intents, purposes, and constructions whatever,’ free; that they may ‘choose it rather’ is beyond question more certain.”

Finally, in what is perhaps the darkest incident of this day, a joint Christmas celebration of Confederate and Union officers and soldiers, as well as civilians, turns into horrific tragedy. The scene is Ripley County in the deeply divided border state of Missouri. A Baptist preacher and Confederate officer, Timothy Reeves, has just finished conducting a worship service for the 300-plus persons present. Afterwards, in the midst of dinner, a Union state militia regiment attacks the celebrants unexpectedly. Murdered are some thirty Confederate soldiers and officers and many civilians in what becomes known as the Wilson Massacre, named after Major James Wilson, the commanding officer of the attacking militia unit. It is a bloody Christmas long remembered in Missouri.

Christmas day thus ends with many of the conflicting and contrasting narratives of the war accounted for among the people called Baptists: Southern defiance and somberness, Northern hope despite death and destruction, enslaved blacks’ reticence in the presence of their masters contrasted with unparalleled joy felt among freedman, bloody tragedy, white Baptists’ participation in Protestants’ muted observance of holy days, and the joy of birthing a new church in the midst of troubling times.