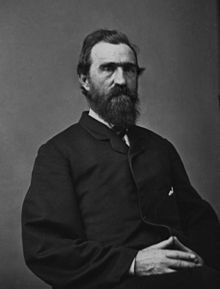 Thomas E. Bramlette (1817-1875) is a Baptist layman, lawyer and state politician in this home state of Kentucky. Like many Kentuckians, he is a Union man. Earlier in the war he was commissioned as a colonel and raised the Third Kentucky Infantry Regiment.

Bramlette has recently resigned his military position and today he becomes the United States district attorney for Kentucky, as appointed by U.S. President Abraham Lincoln. In August, Bramlette, running as the Union candidate, is elected governor of Kentucky by a large margin, remaining in office until September 1867.

During the war, federal policies of recruiting Kentucky black citizens for the Union Army and suspending the writ of habeas corpus for state citizens lead  the governor to abandon his support of the Lincoln administration, thereupon declaring his intent to “bloodily baptize the state into the Confederacy.” After the war, Bramlette issues a general pardon for most Kentucky ex-Confederates and opposes ratification of the Fourteenth and Fifteenth Amendments, as well as the establishment of the Freedman’s Bureau in Kentucky. Apart from war and Reconstruction, the governor establishes the Kentucky Agricultural and Mechanical College (now the University of Kentucky).

In his earlier years, Bramlette was involved in the Freedom Baptist Association, serving as the associational clerk at one point. While the governor remains a Baptist until his death, at least some of his contemporaries in the Baptist faith charge him with becoming too worldly. According to one observer, he “was a man of warm charitable impulses, as well as an honorable and moral citizen. But his great popularity turned his heart too much to the things of this world, and his religious zeal was much abated. His last public office was that of Manager of the Kentucky Public Library Lottery, a position he was filling at the time of his death. How manifest is the sacred teaching: ‘If any man love the world, the love of the Father is not in him.’“