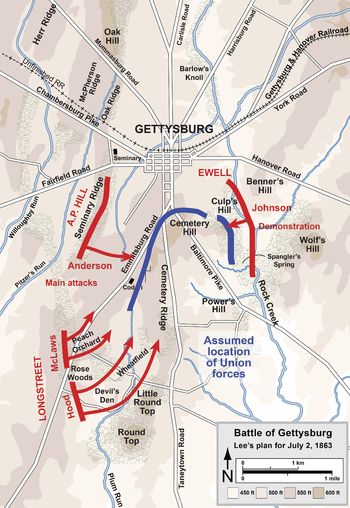 Following Confederate successes in the Battle of Gettysburg on the day preceding, today Confederate Gen. Robert E. Lee orders his Army of Northern Virginia to attack the enemy. Along a six-mile front, attack after attack is made upon the Union forces fortified on high ground to the south and east. Union Gen. George G. Meade shuttles his troops back and forth across the lines in a race to maintain the high ground.

On their right flank and in the middle, the Union lines hold against fierce onslaughts. However, Confederates penetrate the Union left flank at the Wheatfield, Peach Orchard, Devil’s Den and Little Round Top, battlefield places named after crops and trees and topography. The Confederate advance, however, proves momentary as Meade effectively handles his forces well enough to ultimately repel the surging rebels.

By the end of the day, the two sides have taken heavy losses. An estimated 6,000 Confederate and 9,000 Federals are killed, wounded or missing this day. Yet the basic positions of the two armies remain essentially unchanged.

Night falls. Battle sounds fade. The wails of the wounded and dying pierce the darkness.

The enemy attacked me about 4 p.m. this day and, after one of the severest contests of the war, was repulsed at all points. … I shall remain in my present position to-morrow, but am not prepared to say, until better advised of the condition of the army, whether my operations will be of an offensive or defense of character.

Gen. Lee, on the other hand, is anxious. He has nothing to show for the day’s offensives, and has lost many of his men. A staff officer remarks that Lee is “not in good humor over the miscarriage of his plans and his orders.” But in his official report of the day’s activities, the Confederate general is more upbeat:

The result of this day’s operations induce the belief that, with proper concert of action, and with the increased support that the positions gained on the right would enable the artillery to render the assaulting columns, we should ultimately succeed, and it was accordingly determined to continue the attack. … The general plan was unchanged.

One of many Baptist soldiers fighting this day, Patrick Henry Taylor (1838-1907) of the Union’s First Minnesota Voluntary Infantry, Company E, is a Baptist deacon who has fought in many prior battles of the war. Today, in a pivotal moment, Major Gen. Winfield Scott Hancock (1824-1886, grew up in a Baptist church) orders the First Minnesota to attack Confederate forces numbering five times that of the Union unit. The attack is for the purpose of buying time to allow more Union soldiers to arrive in defense of the heights of Cemetery Ridge.

The offensive is successful in its goals, but the unit suffers a loss of 215 of 262 soldiers, the highest casualty percentage of any Union regiment. Patrick H. Taylor survives, but brother Isaac is among the dead. The following day, Patrick buries his brother. 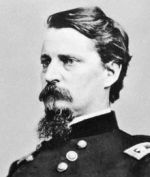 Following the war, Gen. Hancock, widely hailed as a hero in the North, praises the First Minnesota as among the most heroic of the war, and they are credited with having played a major role in achieving Union victory at Gettysburg. Hancock remains in the army for a number of years, later entering politics as a Democrat and narrowly losing the 1880 U.S. presidential election to James Garfield.

On the battlefield and after the war, the lives of these two Baptist heroes — one an officer and later a prominent politician, the other a soldier and later a well-known local figure — represent the stories of many other Baptist men who fought for the Union, survived, and from their service grew families and careers in a nation struggling to recover from the bloodiest war in American history.