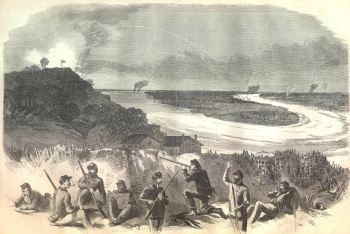 On this fourth of July, the outlook for the Confederacy plunges. A heavy rain blankets the blood-soaked, body-strewn battlefield following the three day Battle of Gettysburg. Confederate Gen. Robert E. Lee‘s Army of Northern Virginia stares across the carnage to the lines of Union Gen. George G. Meade‘s Army of the Potomac. Lee anticipates another attack. But Meade is content to watch, declining to engage the defeated enemy.

Finally, the two armies begin collecting their wounded and make an effort to bury some of the dead. Lee offers, and Meade refuses, a prisoner exchange. Late in the evening, Lee begins his retreat. In the days following, Meade pursues cautiously, following a war-long pattern of Union generals refusing to engage the Confederates when rebel forces are most vulnerable. Ultimately, Meade allows Lee’s army to escape back to Virginia, infuriating many in the North.

Yet this is only the beginning of a very bad day for the Confederacy.

Far to the South, the strategic Confederate city of Vicksburg, perched on the Mississippi River, finally surrenders to Gen. Ulysses S. Grant‘s Union forces following a six-week siege that has left the town’s citizens and soldiers destitute and starving. Within days, the Union is in control of the entirety of the Mississippi River, splitting the Confederacy in two.

The tide of this epic war thus turns decidedly in favor of the United States. The cause of liberty, celebrated this day, looks promising. Soon, perhaps, the war will come to an end, bringing to a close the bloodbath and extending freedom to African slaves.

Meanwhile, far from either Gettysburg or Vicksburg, the U.S. 54th Massachusetts Regiment — the first African-American regiment of the war — is stationed in Union-controlled Beaufort District, South Carolina. Many local freedmen, and likely some soldiers, celebrate Independence Day in a local African Baptist church. Robert G. Shaw, the regiment’s commander and the son of abolitionist parents, describes the festivities at the church in a letter to his mother.

Today there has been a great meeting for the coloured people, at the Baptist Church 6 or 7 miles from camp. I rode down there, and heard a speech from a coloured preacher of Baltimore, named Lynch, & another from Mr. [one word crossed out and illegible] which latter was very bad. It may have seemed so to me, because [two words illegible] very much. (This is private).

Mr. Lynch was very eloquent. Can you imagine anything more wonderful than a coloured-Abolitionist meeting on a South Carolina plantation? Here were collected all the freed slaves on this Island listening to the most ultra abolition speeches, that could be made; while two years ago, their masters were still here, the lords of the soil & of them. Now they all own a little themselves, go to school, to church, and work for wages. It is the most extraordinary change. Such things oblige a man to believe that God isn’t very far off.

A little black boy read the Declaration of Independence, and then, they all sang some of their hymns. The effect was grand. I would have given anything to have had you there. I thought of you all the time. The day was beautiful and the crowd was collected in the churchyard under some magnificent old oaks, covered with the long, hanging, grey moss, which grows on the trees here. The gay dresses & turbans of the women made the sight very brilliant.

As Baptist freedpersons celebrate in South Carolina, even further south a ritual of forgiveness unfolds in the Baptist Church of Christ at Peas Creek in Florida. Eli English, an early member of the congregation, five months ago had been asked to turn in his letter of membership after he

Following months of dialogue between the congregation and a repentant Eli, today he is forgiven.

On July 4, 1863, after the sermon by the Rev. J. M. Hayman, it was disclosed that Eli, who was present, had “made proper acknowledgements for wrongs he had done and expressed his sorrow for them and asked the Church to forgive him, which on motion was done.”

Within a narrative of victory, defeat, opportunities lost, racial tensions, enslavement, freedom, celebration and forgiveness, this is a day to remember in so many ways.

The war, however, is far from over.