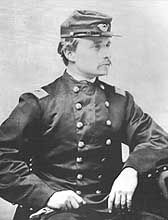 Today the African Baptist Church of Darien, Georgia, the oldest black church in the county, is destroyed by the Union 54th Massachusetts Volunteer Colored Regiment and the 2nd South Carolina Volunteers. Most of the town, in fact, is looted and destroyed by the Union troops, under the orders of the 2nd’s commander, Colonel James Montgomery. The 54th is freshly-arrived from Massachusetts, and torching defenseless Southern towns is not what they anticipated.

Colonel Robert Gould Shaw, commander of the 54th, protests the action to no avail. On the morrow he writes to his wife, Annie, of the day’s events.

If I could have gone on describing to you the beauties of this region, who knows but I might have made a fine addition to the literature of our age? But since I wrote the above, I have been looking at something very different.

On Wednesday, a steamboat appeared off our wharf, and Colonel Montgomery hailed me from the deck with, “How soon can you get ready to start on an expedition?” I said, “In half an hour,” and it was not long before we were on board with eight companies, leaving two for camp-guard.

We steamed down by his camp, where two other steamers with five companies from his regiment, and two sections of Rhode Island artillery, joined us. A little below there we ran aground, and had to wait until midnight for flood-tide, when we got away once more.

At 8 A.M., we were at the mouth of the Altamaha River, and immediately made for Darien. We wound in and out through the creeks, twisting and turning continually, often heading in directly the opposite direction from that which we intended to go, and often running aground, thereby losing much time. Besides our three vessels, we were followed by the gunboat “Paul Jones.”

On the way up, Montgomery threw several shells among the plantation buildings, in what seemed to me a very brutal way; for he didn’t know how many women and children there might be.

About noon we came in sight of Darien, a beautiful little town. Our artillery peppered it a little, as we came up, and then our three boats made fast to the wharves, and we landed the troops. The town was deserted, with the exception of two white women and two negroes.

Montgomery ordered all the furniture and movable property to be taken on board the boats. This occupied some time; and after the town was pretty thoroughly disembowelled, he said to me, “I shall burn this town.” He speaks always in a very low tone, and has quite a sweet smile when addressing you. I told him, “I did not want the responsibility of it,” and he was only too happy to take it all on his shoulders; so the pretty little place was burnt to the ground, and not a shed remains standing; Montgomery firing the last buildings with his own hand. One of my companies assisted in it, because he ordered them out, and I had to obey. You must bear in mind, that not a shot had been fired at us from this place, and that there were evidently very few men left in it. All the inhabitants (principally women and children) had fled on our approach, and were no doubt watching the scene from a distance. Some of our grape-shot tore the skirt of one of the women whom I saw. Montgomery told her that her house and property should be spared; but it went down with the rest.

The reasons he gave me for destroying Darien were, that the Southerners must be made to feel that this was a real war, and that they were to be swept away by the hand of God, like the Jews of old. In theory it may seem all right to some, but when it comes to being made the instrument of the Lord’s vengeance, I myself don’t like it. Then he says, “We are outlawed, and therefore not bound by the rules of regular warfare” but that makes it none the less revolting to wreak our vengeance on the innocent and defenceless.

By the time we had finished this dirty piece of business, it was too dark to go far down the narrow river, where our boat sometimes touched both banks at once; so we lay at anchor until daylight, occasionally dropping a shell at a stray house. The “Paul Jones” fired a few guns as well as we.

I reached camp at about 2 P.M. to-day, after as abominable a job as I ever had a share in.

We found a mail waiting for us, and I received your dear letter, and several from Father, Mother, Effie, and some business correspondence. This is the first news we have had since our departure, and I rather regained my good spirits.

Now, dear Annie, remember not to breathe a word of what I have written about this raid, to any one out of our two families, for I have not yet made up my mind what I ought to do. Besides my own distaste for this barbarous sort of warfare, I am not sure that it will not harm very much the reputation of black troops and of those connected with them. For myself, I have gone through the war so far without dishonour, and I do not like to degenerate into a plunderer and robber,—and the same applies to every officer in my regiment. There was not a deed performed, from beginning to end, which required any pluck or courage. If we had fought for possession of the place, and it had been found necessary to hold or destroy it, or if the inhabitants had done anything which deserved such punishment, or if it were a place of refuge for the enemy, there might have been some reason for Montgomery’s acting as he did; but as the case stands, I can’t see any justification. If it were the order of our government to overrun the South with fire and sword, I might look at it in a different light; for then we should be carrying out what had been decided upon as a necessary policy. As the case stands, we are no better than “Semmes,” who attacks and destroys defenceless vessels, and haven’t even the poor excuse of gaining anything by it; for the property is of no use to us, excepting that we can now sit on chairs instead of camp-stools.

But all I complain of; is wanton destruction. After going through the hard campaigning and hard fighting in Virginia, this makes me very much ashamed of myself.

Montgomery, from what I have seen of him, is a conscientious man, and really believes what he says,—”that he is doing his duty to the best of his knowledge and ability.”

…There are two courses only for me to pursue: to obey orders and say nothing; or to refuse to go on any more such expeditions, and be put under arrest, probably court-martialled, which is a serious thing.

Later, Shaw calls today’s looting and destruction a “Satanic action.” For his part, Montgomery is not disciplined.

Baptists are well-represented among the soldiers of the 54th. In addition, the chaplain of the regiment is William Jackson, a Baptist pastor in Boston prior to joining the regiment. The regiment will soon make a name for itself with a heroic assault upon a Confederate coastal fort.

Darien’s African Baptist Church is rebuilt after the war, as is the town.