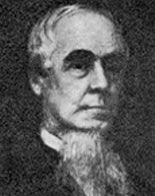 The voice of renowned Virginia Baptist minister — and president of Richmond College (later University or Richmond) — Robert Ryland is appealed to this month in the pages of the Virginia Baptist Religious Herald.

Ryland’s pastorate is that of the First African Baptist Church of Richmond, where he has served from 1841 (the year of the formation of the congregation as a branch of the First Baptist Church of Richmond) to the present, and where he remains as pastor throughout the war. Virginia law dictates that African churches be led by white pastors, and Ryland goes the extra mile in educating his charges in the knowledge of the Bible, to the point of authoring (in 1848) a 148-page catechism “for coloured people.” At the time of his resignation from the African congregation upon the conclusion of the war — in order that church members may elect an African pastor — he is credited with having baptized over 3800 persons during his ministry.

Such is Rev. Ryland’s respect among white Baptists regarding his work among African Baptists that now, in the midst of the Confederate’s struggle to preserve African slavery, a writer in the Herald suggests that he write a book to address the relationship of Christianity and Africans. The North Carolina Baptist Biblical Recorder makes note of this request, while offering additional commentary.

A writer in the Religious Herald proposes that Dr. Ryland prepare and publish, at his earliest convenience, a volume, to be called, “Christianity and the African.” The points to be brought out are, “the adaptedness of the gospel to the most illeterate and ignorant, the peculiar defects and the peculiar beauties of the piety in the negro, the purity and elevation of Christian character he sometimes attains, the capability of colored children to embrace the gospel, an account of the ways ignorance affects piety, the amount of irregularity among colored church members as compared with that among white, their shrewdness, their rhetoric, their music, their logic, their prayers, and practical rules for the conduct of colored churches.” Such a book, if well prepared, would be an invaluable addition to the religious literature of the South. Dr. R. we presume, is well qualified for the work, and we hope it will be forthcoming.

Perhaps due to the time involved pastoring a large congregation and presiding over a college, Ryland does not follow through on the suggestion.